England held all the aces in defining battle of the breakdown 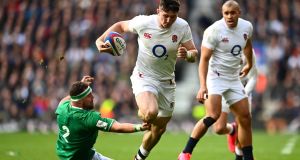 Tom Curry of England makes a typical break during the victory over Ireland at Twickenham. Photograph: Clive Mason/Getty Images)

On one of those excruciating Twickenham days, beneath it all was Tom Curry and Sam Underhill, the ghost and the darkness of English rugby.

Remember Ackford and Dooley? How about the all-conquering Johnson and Dallaglio era?

Now we live in the age of Underhill and Curry. The game has evolved with these English tearaways quietly immense alongside athletic locks seeking to destroy like flankers; man of the match Courtney Lawes being the prime example of the modern hybrid.

Maro Itoje was all the above rolled into one force of nature with three freakish acts between minute 31 and 35. His showing was a throwback to when Martin Johnson would bend Test matches to his iron will, with a mean streak that made Twickenham seem bigger than it already is, and the Irish feel smaller than they already are.

“Maro was not only that physical, menacing type player but also being a guy who can influence other players to play well,” said a delighted Eddie Jones. “That was quite evident.”

Hidden under the rubble were Underhill and Curry, still young men at 23 and 21, average sized at 6ft1in apiece and somewhere between 106kg and 109kg, but that’s all muscle. All power. Neither seek to intimidate nor scrag foes in collisions as others can do that for them.

“At half-time if it was a cricket game we could have declared,” said Jones.

Perhaps Caelan Doris and Dan Leavy might be able to counter the twin threats of Curry and Underhill. Leavy will always have Twickenham in 2018 but for now he baby steps back from knee reconstruction. Doris did not arrive into this furnace until 60 minutes with England already leading 17-5.

By then most of the shouting, of which there was plenty, in referee Jaco Peyper’s ear had ceased. Owen Farrell didn’t have to wait long for Johnny Sexton to fall silent. A fumble to gift George Ford his eighth-minute try was quickly followed by an awful duff of a penalty miss as an essential three points disappeared.

That invited Manu Tuilagi to spark his physical dominance by milling CJ Stander. Ford began to introduce the running threat of Curry and Underhill in quick succession but it was their work off the ball that broke Ireland.

Ryan stayed in the fight to the bitter end, eventually telling yappy Ellis Genge “you are full of shit”. Genge smiled. Ryan had already leaped off the grass to lunge at the Leicester prop. Itoje and Tuilagi were quick to embrace the man they call “baby rhino”.

Confrontations were constant (none of them involving Curry or Underhill who were far too busy). There was even a “scuffle, nothing more,” said Jonker, that saw Itoje rip Stander’s jersey clean off.

But the damage was being done by Ford’s clever use of space in behind with Jacob Stockdale hesitating over a ball – just like last year – to allow Elliott Daly steal another five points.

As Farrell kept reminding Peyper, the English dominance was real.

“In the 22 it’s coming,” Farrell insisted. “Everything we said is coming.”

The implication being that Ireland were illegally slowing English possession. Curry got a revenge shot on Ryan as the juggernaut rolled downfield.

On the half hour mark Ireland desperately needed a purple patch to turn the tide but Itoje was omnipotent; a towering block on Conor Murray’s box kick and two punishing tackles on Robbie Henshaw, way behind the gainline, sucked the joy from a large Irish contingent in the stands.

Curry almost settled the result before the turn, spinning out of Andrew Conway’s tackle only to be denied a certain try by Rob Herring’s desperate hand trip. But the 17-point interval deficit almost felt like a relief. Something dramatic was needed for Ireland to stop the rout.

What looked to the home crowd like Stander assaulting Farrell at a ruck was interpreted as the England captain refusing to release the Ireland number eight.

“Clearly not punching him,” Jonker told Peyper. “12 white started it. Clearly trying to get away. No punches thrown.”

Ireland penalty, as Farrell was told off, and nine punishing minutes into the second half Henshaw squeezed under the white line. Yet again, Sexton botched his conversion.

That was the beginning and end of a revival. England returned to Ireland’s 22, refusing to leave until Underhill shunted Luke Cowan-Dickie over the try line on 62 minutes.

Both sets of reinforcements had arrived but it no longer mattered, Doris replaced the anonymous Van der Flier, and while the Ireland selectors can point to the fight of O’Mahony – who carried more than usual – the back row was overrun.

Bravery is never enough here. This can be dressed up any number of ways but it gets forever filed away as one of those miserable Ireland visits to Twickenham.

Dublin come from behind to see off Galway in Division 1 dead rubber 18:01
TV View: Baby talk in the studio, rusty performances on the pitch 17:55
Ulster start fast to put the Dragons to the sword in Belfast 17:38
Here is your handy guide to sport on television this week 17:01
Southampton stop Everton in their tracks at St Mary’s 17:11
Crossword Get access to over 6,000 interactive crosswords