Word of mouth, by the numbers and Landowne’s new one point-winning habit 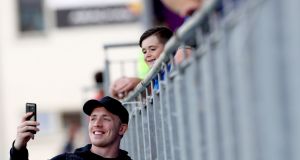 James Ryan was in a good mood last week. That’s because of Dan Leavy. No, no silly, not that he’s back on the paddock. He has a new puppy. All sigh. Okay, okay it’s because he is back running with Leinster after one of the most horrific injuries of last year.

The Irish flanker is continuing to make progress and while he won’t feature soon he will shortly be aiming to make a competitive backrow even more of a selection headache for Andy Farrell.

“It’s brilliant, he’s been in that gym for 10 months working his ass off which I knew he would because he’s like a dog when he gets going,” said Ryan sticking with the canine theme of the day. “He’s running now, by all accounts he’s flying it with the rehab which is great.

“I’m catching up with him at the weekend, he’s got a new puppy actually so I’m meeting him for coffee. He doesn’t have a name for it yet so he’s been calling him ‘It’ for the last two weeks.”

So there’s the soft side to a tough as nails flanker. But Ryan, a good friend of Leavy, can’t allow him to get too much of the praise.

“It’s not that hard to come up with a name but he still hasn’t,” said Ryan. Given one of Leavy’s attributes on the pitch is that he can be a total mongrel, no way can the dog be called Trixie, Gigi or Lexi. Surely it’s got to badass. Tyson, Rommel or Hellboy.

Lansdowne the masters of one-point wins

It used to be left up to the great Sergei Bubka, the Ukrainian pole vaulter to squeak over the bar for another championship or world record. Savvy, Bubka won six consecutive IAAF World Championships, an Olympic gold medal and he cleverly broke the world record no less than 35 times.

That’s because when he broke each record he was given a cash bonus. Every time he vaulted for the record he went higher by only a fraction so that he could accumulate 35 bonus prize wins rather than one or two times throughout his career.

Lansdowne have taken a leaf out of that book and have won their last four matches in the All Ireland League Division 1A. But all of them by just a single point. No matter, the Bubka way is just as effective as winning by a landslide and Lansdowne have been able to secure a fourth place in the table.

Their 29-28 win on the back pitch on Friday night courtesy of tries from Darragh Murphy and James Reynolds and kicking from Craig Ronaldson (two conversions and five penalties), Lansdowne nicked the game.

But it’s difficult to say they were lucky as the last three games before the win against Clontarf also fell with the Ballsbridge club; 15-14 away to UCC, 19-18 at home to UCC and 17-16 away to Terenure. That little run kicked off on December 14th in The Mardyke against the Cork students.

Lansdowne’s next match up is away to Young Munster in Tom Clifford Park on Saturday. What are the chances?

“I don’t really remember it to be honest. That whole day was a bit of a blur, I think because I was so new on the scene I didn’t really appreciate the magnitude of what a Triple Crown and a Grand Slam was. It all felt like ‘oh, this is very normal’, do you know what I mean?” – James Ryan on some of the issues when career success comes quickly.

7,967: The number of fans who watched Leinster beat Cheetahs as the North and South stands were closed for safety reasons with wind speeds of 65 kilometres per hour. It was, understandably, the lowest turnout in the RDS all season.