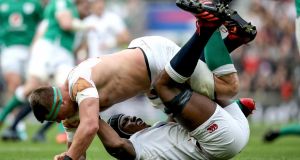 Ireland’s CJ Stander loses his jersey in a scuffle with Maro Itoje of England during the Six nations game at Twickenham. Photograph: Dan Sheridan/Inpho

It says everything about this one-sided affair that, in truth, the final scoreline assuredly flattered Ireland, for if either team will lament letting a bonus point slip by it was the home side. England out-muscled, out-skilled and out-thought Andy Farrell’s team on a less than pleasing return to his old stomping ground for the first time as Ireland’s head coach.

The humble pie at the next Farrell family dinner will be all his. The game was up by the halfway point and the best thing that happened for Ireland in the first 40 minutes was the half-time whistle, when trailing 17-0 almost amounted to getting out of jail.

England had done their homework and executed their gameplan clinically. Their defensive line speed and aggression in the tackle repeatedly forced Ireland’s pedestrian running game backward or simply forced errors.

Seemingly shook like a boxer who catches one on the jaw, Ireland’s timing went askew under the pressure. But England had little difficulty reading the intended, usually static, carrier, whether it was one or two off the scrumhalf, or out the back from Johnny Sexton.

In that first half only CJ Stander of the pack made more metres than carries, 14 from eight. Everyone else was in deficit. Even Bundee Aki didn’t make a solitary metre from his four carries, although he had a much bigger effect in the second period.

By contrast, as feared, the return of Manu Tuilagi gave England predictably more ballast in midfield. Ominously, his very first carry from off the top of a lineout ball took him past Josh van der Flier and bumped Sexton out of his way. Stander brought him down, and was employed to stiffen that channel, where Courtney Lawes also made big inroads. With Ireland’s line speed evaporating, by contrast they were increasingly making soak tackles.

The English forwards also had better handling skills and hence variety. For example, when Tadhg Furlong shot up on Kyle Sinckler in the second half, the English tighthead simply tipped the ball on to Luke Cowan-Dickie at full flow. There were no comparative examples in green.

However, also as feared, Elliot Daly reverting to fullback enhanced the rich array of kicking strategies England used to find grass in the Irish backfield a year ago in Dublin in tandem with Ben Youngs, George Ford and Owen Farrell. This time, the damage to Ireland was even more telling.

Jordan Larmour hadn’t been tested like this by Scotland or Wales, and in the eighth minute Youngs used an advantage play to grubber through the middle, with the Irish fullback having too much ground to make up from the right-hand side. Sexton turned and recovered to reach the ball first, but couldn’t control the ball with either his left, right, or left-hand again, under pressure from Farrell. Following up Ford completed the touchdown and it was already Swing Low time.

Ireland had a break when Daly fumbled a poor Murray box kick and Itoje played the ball from an offside position. The maul earned a penalty and another followed when Lawes didn’t release. However, Sexton compounded an error strewn start by skewing his penalty into the wind wide.

Soon after, from another advantage play, Ford shaped to crosskick but instead disguised another chip over the top, and this time, as Jacob Stockdale dithered, Daly pounced for a seven-pointer uncannily akin to the first.

Ireland also lost Cian Healy to what seemed a painful right hip injury. Aki then fumbled a Sexton pass, which the latter re-gathered from an offside position. This was rapidly going from bad to worse.

Defending their line yet again, O’Mahony chop tackled Lawes and Aki won a penalty, which to describe it as relieving would be an understatement.

Ireland’s next attack, per se, in the middle third of the pitch went much like their defence – backwards. The same with the next one, when Sexton pulled the ball back for Aki and he was met immediately by Itoje, the master spoiler, who’d read the play. When Rob Herring knocked on, Joseph retrieved Youngs’s kick by outmuscling Andrew Conway. This led to a Farrell penalty and a 17-0 lead.

On the resumption, with Sexton carrying harder to the gainline, Ireland finally strung together some phases in English territory, only for Itoje to rip the ball from David Kilcoyne. When Ireland went to the corner, Itoje sacked the maul before a second collapse led to a turnover.

In a narky game, featuring plenty of English sledging, when a prostrate Farrell held Stander’s leg like a dog with a bone he was rightly penalised. There was more intensity to Ireland’s carrying and recycling, but ball carriers were still too static.

Opting for a scrum from another penalty, Murray charged off the base and O’Mahony generated more momentum before Henshaw took Murray’s pass and pumped his legs to go through the tackles of Tom Curry and Farrell for the try. Alas, Sexton again skewed his difficult conversion wide.

Even so, a raft of frontrow replacements only underlined England’s immense scrum supremacy. Twice England went to the corner, and despite the introduction of Rónan Kelleher, Ultan Dillane and Caelan Doris, they were immediately backpedalling as the English backs joined in to help drive Cowan-Dickie over the line.

John Cooney was dispossessed by May, illegally it seemed, and the home crowd were less than amused when Henshaw’s late hit prevented the English winger from chasing his own kick.

The departure of Conway for a HIA meant Ross Byrne came on and Sexton moved to inside centre. Doris and Kelleher, showing the benefits of an Irish carrier finally coming onto the ball, added impact and Cooney made some good support runs to breaks by Doris and Stockdale, but after Sexton’s crosskick just eluded O’Mahony, the Irish lineout maul was again turned over.

In over time, one final siege yielded a trademark close-range Andrew Porter try, his first for Ireland. It hardly sparked a smile, much less a cheer, but the impact off the bench by the younger guns will heighten debate about Ireland’s selection against Italy.