Irish pack must expose the weakness in England’s backrow 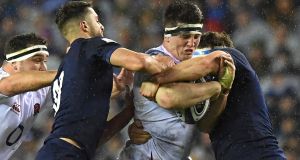 England’s backrow feels incomplete, certainly unbalanced, when denied the force of nature that is Billy Vunipola. The sight of this giant careering off the scrum to power Saracens to European glory at St James Park last year will not be visible at Twickenham and Eddie Jones refuses to replace like with like.

Understandably, so. There is only one Billy Vunipola and unfortunately he’s broken, again.

The Jones solution is to impose “brutality” on all comers without a genuine number eight. The undulating, fascinating and high risk Tom Curry experiment continues.

The in-form England backrowers are all opensides – Curry, Sam Underhill and rookie Ben Earl (who at 22 is a year older than Curry) – with Jones turning to bone crunching lock Courtney Lawes and Lewis Ludlum for blindside boom due to Mark Wilson’s injury.

Undoubtedly a generational player, Curry issues with the technical side of controlling possession off scrums in Pairs were not as evident in the Murrayfield rain.

“Unless I’m putting on an extra 30kg I’ll struggle to be Billy,” Curry told the BBC. “There are going to be slight differences between how we play defensively and attacking-wise at the breakdown.”

In the shadow of France’s explosive star turn Gregory Alldritt, who has travelled 101 metres off 33 carries, beating five defenders with two clean line breaks, Curry is only slightly bettered by CJ Stander.

The Sale flanker has 24 carries for 34 metres to Stander’s 23 for 36 metres, although the Munster man has one clean line break, to zero from Curry, and four defenders beaten to just one by Curry.

“What really changes is at the base of the scrum,” Curry admitted.

“We’re doing a lot of drilling during the week and contested scrums but it changes during the game.”

The onus is on the Irish pack to expose this weakness by creating messy ball at the base.

Jones has admitted this selection is a gamble but he’s equally adamant that Curry, who he capped as a teenager, and the brilliant Underhill are needed every time England take the field.

“People say he is out of depth, he is not really,” said Stander of Curry, “he still has the same work ethic and still does what he does on the pitch. I have watched a little bit of his work at the base and it is still good so I think people are just comparing him with Billy who is a guy that brings momentum from anywhere on the pitch. But I think he is one of their best players and to think we can exploit that is not going to work because he is doing a great job back there. Some people think it is a difficult switch [flanker to eight] but that switch is quite easy, you just have to look after the ball at the back of the scrum.”

Interestingly, number eight was the very slot Ireland coach Andy Farrell sought to evolve in 2020, partially at the expense of Stander.

For the opening three minutes against Scotland, the pre-Championship plan to unleash Caelan Doris as Ireland’s modern all singing, all dancing backrow, was on track. Doris’ excellence over opposition ball was already evident. Then he got knocked out for the second time in three months.

Similar to Peter O’Mahony’s reaction to the instantaneous end of Jamie Heaslip’s tenure before the England match in 2017, the Munster captain stormed into the fray with enough accuracy to temporarily put the Doris era on ice.

Stander, returned to the base of the scrum, producing what have arguably been his two best performances in a green jersey, doing a decent impersonation of former Springbok tearaway Heinrich Brussow when clamping on isolated Scots and Welsh runners for five clean turnovers, two of which against Scotland proving at least as valuable as any of Johnny Sexton’s 19 points.

“If someone gets selected into the pool of your backrow then you go ‘okay, there’s someone new now’ it probably subconsciously kick-started something,” said Stander, whose six passes against Wales brought a different dimension to his normally bullish approach. “Like, I know I needed to play my best, we all know we needed to do that.”

Turns out nothing motivates a veteran Munster flanker more than the arrival of a prodigious Leinster schoolboy, hyped-up ever since standing out physically at 15 against 18-year-olds. Heaslip recently branded Doris “one of the best backrows in the country” so how else were O’Mahony and Stander going to respond to such a clear and present threat to their careers?

O’Mahony has long been criticised for lacking the numbers of other top tier flankers but 10 tackles off the bench against Scotland and 12 against Wales dovetail nicely with his other (largely unseen) work like the latch that allowed Tadhg Furlong plough over for a try.

However, O’Mahony, for all that lineout and breakdown expertise, offers very little ball carrying threat in comparison to Doris.

Really, he is not supposed to be here but his aggressive, stubborn nature has been evident ever since his man of the match display in victory over England three years ago.

Speaking of man of the matches, the mobile heavies have been kings of the Six Nations: Stander has two, so does Alldritt with Underhill and Justin Tipuric keeping the champagne among rugby’s super athletes.

At openside, Underhill is now the gold standard but Josh van der Flier has been performing to an international standard since showing well on debut at Twickenham four years ago.

And still, the whispers continue. Dan Leavy’s sublime performances en route to the 2018 Grand Slam cannot be denied. Nor can the potential phenomenon that is Scott Penny.

But, with Leavy inching back from a horrendous injury and Penny starting for Leinster in the Pro 14 this weekend, Van der Flier has repeatedly earned the seven jersey. He made the defensive play that ended the Scotland game. He scored off the maul against Wales and laid the platform for Andrew Conway’s bonus point try with a vital carry over the gainline. His unending engine has produced 27 tackles over two matches.

How he compares to Underhill may prove the decisive battle. The Bath flanker had the better of him during their European skirmish at The Rec last season and Ben Earl’s arrival for Underhill, as Munster will have noted this season, can bring a similar threat in all departments.

That’s why Doris must hit the ground running when relieving the most shattered body from O’Mahony, Stander and Van der Flier.

Ideally, the game is still on the line.