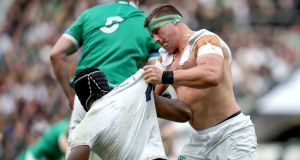 CJ Stander gets to grips with Maro Itoje during Ireland’s defeat to England. Photograph: Dan Sheridan/Inpho

England exploited space in the Irish backfield ruthlessly early on and miscommunication with Johnny Sexton led to their first try. Starved of an attacking platform on a frustrating afternoon. Rating: 5

A fine hit on Daly after 17 minutes helped stall one menacing England attack but he was mainly isolated. Marshalled the dangerous Jonathan Joseph well until departing for a HIA late on. Rating: 6

Struggled with England’s linespeed - especially in the first half - often receiving the ball with white shirts in his face. Took his try well, however the craft of Garry Ringrose was missed. Rating: 6

Aki was one of the few players able to live with England physically, carrying 11 times, making 11 tackles and earning a rare turnover in the 31st minute with Ireland under the pump. Rating: 7

Largely at fault for England’s second try, falling asleep as Elliot Daly pounced to touch down. He didn’t see much ball until late in the second-half when the game was already gone. Rating: 5

A rare nightmare afternoon for Ireland’s skipper, whose handling error led to England’s opening try. He tried hard to make amends but his kicking was poor out of hand and even worse off the tee. Rating: 4

Lasted 55 long minutes until he was hooked. Murray’s box kicking tended to increase the pressure on Ireland and he couldn’t generate any quick ball with the pack being pulverised in front of him. Rating: 4

Was the first casualty of England’s early onslaught, limping off after 25 minutes with Ireland on the rack. Unable to make the impact during his brief cameo he would have liked. Rating: 5

An honest effort in the face of brutal physicality and his lineout throwing was clean despite the set-piece being largely ineffective. However, he probably hasn’t done enough to keep Ronan Kelleher at bay. Rating: 5

Rumbled into the ring in stunning form but struggled to stamp his mark on proceedings as Ireland were swamped from the off, however he was far from alone on that front. Rating: 6

James Ryan was the primary lineout target despite Toner’s return to the fold, and he was unable to match the ball carrying outlet and the physicality of the absent Iain Henderson. Rating: 5

Raged against the dying of the light with 13 carries and eight tackles but lacked support on a day when Maro Itoje and Courtney Lawes bullied the Irish pack. Rating: 6

Helped drag Ireland back into the game early in the second-half with a couple of big carries leading to Henshaw’s try, but couldn’t gain his usual foothold on the floor. Rating: 6

Van der Flier has now started in the last three meetings with England, the hallmark of each being Ireland’s struggle to cope physically. Worked tirelessly with 11 tackles but ultimately to little effect. Rating: 5

Ireland’s best player for the third-consecutive match, Stander’s 15 carries and 17 tackles were the highest of any in a green jersey. Relished the physical challenge during another gruelling 80-minute shift. Rating: 8

Dave Kilcoyne carried tirelessly on his premature arrival, John Cooney grew into the game while Caelan Doris’s 21-minute cameo was a ray of light on an otherwise gloomy day. Rating: 7

Andy Farrell can’t be blamed for Ireland’s numerous errors or England’s physical edge, and he showed encouraging faith in his bench. However, his side displayed little in the way of attacking ambition or cohesion. Rating: 5