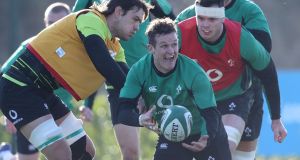 In making nine changes to Ireland’s starting XV for Sunday’s Autumn Nations Cup game against Georgia, including a first start for Billy Burns and a prospective debut off the bench for Shane Daly, Andy Farrell will bring to 41 the number of players used in eight matches under his watch in 2020.

In addition to Stuart McCloskey, making his first start in two years, this presumes John Ryan and Kieran Marmion will also make their first appearances in over a year off the bench. Further heralding the post-World Cup winds of change, Daly will become the tenth new cap under Farrell, who has been true to his word in seeking to grow the playing pool at his disposal.

“Unless we find out and give people the opportunity, how do they gain the experience?” he reasoned. “Having said that, you don’t come with a plan saying ‘we’re going to cap 10 players’. Opportunity arises for players regarding injury, etc. We’re glad to grow the pool and find out about people. Then, when it comes to the Six Nations after Christmas hopefully that pool is grown and you’ve got a few more headaches along the way.”

“There’s some good combinations there with Billy, Stu and Jacob at fullback. They know each other pretty well,” he added in reference to the Ulster trio of Burns, inside centre Stuart McCloskey and Jacob Stockdale, who has been reinstated at fullback.

Minor niggles also contributed to the absence of Andrew Conway and James Lowe, as well as Johnny Sexton and Robbie Henshaw.

With Burns making his first Test start, the 90-times capped Conor Murray has been restored for his 82nd Test start (including the Lions) after his impressive response, à la Peter O’Mahony, to a couple of games on the bench.

“We’re excited about this team going out and giving a performance. Righting a few wrongs from last week. The obvious ones are getting some continuity from our set piece. When we’re given the amount of possession that we had, making sure we play with our heads up and see the opportunities. Deliver on executing those opportunities.”

For all the team’s physicality and courage, Farrell added: “Sometimes I thought that got in the way of our calmness, to be able to see the opportunities and be able to execute on those opportunities.”

“That’s what top-level rugby is all about, we’re talking about the top 2 percenters in world rugby. To be able to go to Twickenham and deliver, you’ve got to have an all-court game and that’s being able to be calm and communicate properly and therefore play at the right tempo that you’re able to execute at.”

“Because the reality is that in those top 2 percenters of the game that I’m talking about – if you get four chances, you certainly have to nail three of them, don’t you? You should be nailing 75 per cent at that to level and that’s what we need to get to.”

The one chance that Ireland did take was when Burns chipped over the advancing white line for Stockdale to gather on the full and arc around the last defender for his 18th try in 31 Tests. Like Jack Carty, Burns has an inventive kicking game which he has to be given licence to use.

“Yeah of course, Billy is an attacking threat,” acknowledged Farrell. “He isn’t just a ball-handling or kicking attacking threat, he’s an attacking threat at the line as well. He can take people on, he’s got a turn of speed and a bit of explosiveness about him as well. Hopefully he can bring a bit of that as well as some guidance of being able to marshal the team around the field, because at 10 that’s an obvious one he’ll get judged on.”

Farrell has also restored the Ulster combination of hooker Rob Herring and lock Iain Henderson, who will call the lineouts. By comparison the options at prop are a bit stretched with Ed Byrne injured and mindful of John Ryan sustaining a back injury in the Twickenham warm-up as well as Andrew Porter’s high volume of work (four big games for Leinster and four in a row for Ireland including 80 minutes last week) he had “a couple of days off this week”.

After just one Test since the World Cup, which was also the only game their home-based players have played since March, Georgia are likely to benefit from their outings against England and Wales. Farrell expects the Lelos to bring “everything that everyone thinks that Georgia is going to bring. They love a maul and a scrum and a breakdown and being very combative in any of the collision work. So we’re 100 per cent expecting that.”

“With the halfbacks as well, we know they can play a varied game. We’ve seen that in their last couple of games in poor weather. Even the ambition they’ve shown within those games has been nice to see. So we know they want to play with ball in hand and want to attack us.”

“We’re expecting something a little bit different probably to what we’ve seen over those last couple of games against England and Wales.”

Kick-off at the Aviva Stadium is 2pm on Sunday, November 29th, and the game is being televised by RTÉ and Channel 4.