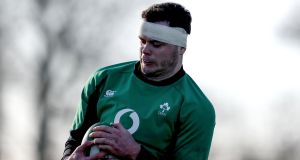 So, here we are again. In this strangest year Ireland have been left with an all too familiar feeling - picking through the bones of a brutal defeat to England.

Once again, Andy Farrell’s side had no answers in the face of ferocious English line speed and physicality as they were beaten 18-7 at Twickenham last weekend.

Farrell has maintained Ireland’s loss in London will stand to his players, some of whom were experiencing one of rugby’s acid tests for the first time.

And maybe it will. But the truth is Ireland have plenty to work on and improve before Eddie Jones’s side arrive in Dublin next March, looking for a fifth-consecutive win over their old rivals.

Perhaps this weekend’s final Nations Cup group game, against Georgia at the Aviva Stadium, will come at exactly the right time.

The visiting Georgians will provide a stuff test up front - particularly at scrum time - but this could be a perfect chance for Farrell to experiment with personnel and encourage his side to play an expansive, attacking game.

A few tries and a morale-boosting victory, albeit against Tier 2 opposition, should cheer everybody up a bit heading into December. Here is everything you need to know ahead of this weekend’s match.

The third round of the Autumn Nations Cup, with Ireland welcoming Georgia to the Aviva Stadium.

The games kicks off at 3pm on Sunday, November 29th.

All of Ireland’s Autumn Nations Cup fixtures are being shown free-to-air by RTÉ and Channel 4 - Saturday’s match is on RTÉ One. The rest of the weekend’s fixtures - including Wales against England on Saturday - are available on Premier Sport in Ireland, and via Amazon Prime in the UK. You can, of course, follow all of the Irish match via out liveblog which will be up and running from around 1.30pm.

So, what’s happened so far?

Ireland opened their campaign with a comprehensive, but perhaps misleading, 32-9 victory over a beleaguered Wales side in Dublin. Defeat to England followed, leaving Farrell’s side in second place in Group A. The other two games in the group have seen England and then Wales dispatch Georgia.

Group B has been diminished by the non-participation of Fiji, who have been forced to concede all three of their fixtures due to a mass coronavirus outbreak within their squad. As a result, France, Scotland and Fiji were all awarded 28-0 walkovers. In the two games which have taken place to far Gregor Townsend’s Scots edged Italy in Rome before being edged themselves by Les Bleus in Edinburgh.

What are the permutations?

The format of the Nations Cup sees teams playing their counterparts in the opposite group in a finals weekend - first plays first, second plays second and so on. As it stands, in order for Ireland to finish top of Group A they need to beat Georgia with a bonus point, while hoping Wales beat England in Llanelli. They also need to overturn a points difference of 39. In Group B, France are guaranteed to leapfrog Scotland and finish top if they beat Italy this weekend. This means the likeliest line-up for the finals would see England play France, Ireland play Scotland and Wales play Italy.

Andy Farrell has handed a first Ireland start to Billy Burns on Sunday, with Ross Byrne dropping to the bench. Conor Murray is also recalled in the halfbacks, while Jacob Stockdale returns at 15 and Stuart McCloskey is named at 12.

Up front James Ryan resumes as captain, with Finlay Bealham named as starting loosehead. There’s also a place for Will Connors in the backrow, alongside Tadhg Beirne and CJ Stander.

Georgia on their minds

This is just the fifth meeting between Ireland and Georgia, and the first for six years. Their first resulted in a 70-0 win for Ireland in Rugby World Cup qualifying in 1998, with another drubbing four years later - 63-14 in 2002. Georgia pushed Ireland all the way in the 2007 World Cup - losing 14-10 in Bordeaux - with the last clash between the two seeing Ireland win 49-7 in the 2014 November Tests.

Getting the basics right

In his column this week Gordon D’Arcy has given a damning assessment of Ireland’s performance against England last weekend, suggesting if the teams were still playing now the scoreline would not have changed. . .

“The coaching in camp will come under severe criticism until they fix the basics. I know what Joe would do. I know what Cheika would do.”

Nigel Owens will be bossing Ireland about this week.

Sunday looks relatively mild for the last Sunday of November - around 10 degrees - and most importantly should be dry.