‘Ireland are a tenacious side and a side that never go away, so you have to fight to the end’ 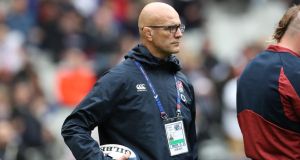 England assistant coach John Mitchell says they are ready for whatever Ireland throw at them on Saturday at Twickenham. Photograph: Billy Stickland/Inpho

John Mitchell insists England must be ready for a fight to the end against Ireland in Saturday’s pivotal Autumn Nations Cup clash at Twickenham.

Eddie Jones’s men face the first meaningful test of the campaign after brushing aside Italy and Georgia as they target a place in the showpiece event on finals weekend next month.

Three conclusive wins in succession paints a picture of English dominance in meetings between the old rivals, but defence coach Mitchell views history as a false prophet.

“Ireland are a tenacious side and a side that never go away, so you have to fight to the end,” the former All Blacks boss said.

“You have to initiate it, you have to get in first. It doesn’t always fall your way and you have to win the big moments.

“We expect it to be an excellent game with a whole load of different contests and many individual battles.

“Ultimately the team that’s most cohesive, gets in first and wins those big moments will give themselves the best opportunity.

“The past gives you some information, some of it is relevant, but not a lot of it.

“What’s relevant now is that you have two different teams in a different context and both wanting to win the Autumn Nations Cup.

“It’s the most important game of the year so we want to walk towards whatever is coming and get the right performance.

“We’re looking forward to whatever they chuck at us. We’re ready.”

England have selected their strongest available side, lighting the fuse for a fixture capable of breathing life into a competition that has yet to capture imaginations.

Flankers Tom Curry and Sam Underhill have been reinstated alongside number eight Billy Vunipola, while the return of props Kyle Sinckler and Mako Vunipola brings firepower to the front row.

Smarting at the claim made by South Africa’s World Cup-winning coach Rassie Erasmus they are “soft”, Ireland have drawn a line in the sand by picking a pack to trade blows with England.

“They’ve gone for a big backrow and a big back five. They obviously want to play a power game and take us on, which is great. We can’t wait,” Mitchell said.

“They’ve selected a big pack. They have a running nine and a 10 who likes to play long side and short side and who has a fairly handy kicking game. The wingers of course can penetrate in close.

“They have a number of options so we’re expecting a bit of variety from them, but they’re obviously looking to create a platform and stop our momentum.”

Curry has warned Andy Farrell’s men that the backrow that took the World Cup by storm is more formidable than ever.

England’s 2019 world player of the year nominee features alongside Underhill and Vunipola for only the second time since the trio blazed a trail to the Yokohama final 12 months earlier.

Vunipola is restored to full fitness after a broken arm and Curry said: “We’ve all done quite a lot of growing since the World Cup. Obviously not in height, I wish!

“But in terms of how our games have gone we’ve developed a lot since a year ago, especially training, playing off each other and with each other. It’s going well.

“Sam is brilliant defensively – you can always rely on him especially around the tackle contest and at the breakdown.

“Being able to play off Billy in attack is brilliant, guaranteed to get the ball forward and open spaces around him.

“Getting the balance right is massive in the backrow and supporting each other we can hopefully achieve that.”