Lancaster says Ireland need to finish series on a high 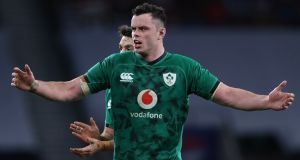 James Ryan: “He’ll move on very quickly and he’ll roll his sleeves up. If he’s got captaincy he’ll want to do a great job,” says Lancaster. Photograph: Billy Stickland/Inpho

The game against England at Twickenham may have been perceived as the biggest Ireland face in the series. But how they finish the tournament is important for the team moving towards next year’s Six Nations Championship.

Lancaster added that there is currently a gap in playing levels between England and Ireland but the nature of the game last weekend will have advantages as well as disappointments. The transitioning process in which coach Andy Farrell is currently engaged also has certain pitfalls.

“From Ireland’s point of view, they’ll be disappointed to have conceded the two early tries. It set the tone for the game,” added Lancaster. “I thought Ireland never quite got the cohesion they would have wanted.

“So, you look at the transition Ireland are going into. I was thinking about it, Dev Toner, Rory Best and Rob Kearney, that’s about 250 caps in those three players alone. Yeah, they’ll be disappointed. And there is a gap because it’s reflected in the result.

“But I do think Ireland are on the right track giving these lads opportunities to play in these big games. It tests you and you learn a lot about yourself in this window. I think it will stand to Ireland in the Six Nations.”

Lancaster, who works with James Ryan at Leinster, believes the personality of the lock and last week’s captain will allow him to react the right way to the defeat. Several penalties conceded and a poor lineout from Ireland hurt the side in trying to claw back from the early England scores.

“I think James will be wanting to get his own game right and if he has the responsibility for the lineout and I don’t know what they are going to do, maybe Iain Henderson will come in and run the lineout. But he’ll be fine. He’ll move on very quickly and he’ll roll his sleeves up. If he’s got captaincy he’ll want to do a great job. He’s very level-headed.

“He’s really honest James, as a player and a person and he’s very not self-critical but very aware of his strengths and areas he needs to work on. He’ll be wanting to lead the lineout well. He’ll also want to captain. He’ll lead by example in that regard.”