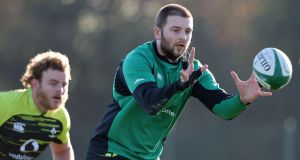 Andy Farrell continues to state that Twickenham was a “priceless experience” ahead of a fixture this Sunday against Georgia that offers little real value. The Ireland coach’s first year in charge has already been defined by defeats to England and France.

At least Iain Henderson returns to mend a broken lineout. Not that the Georgians – guided by Ulster duo David Humphreys and Neil Doak – are going to provide a stern test of an Irish set piece that has malfunctioned since Dev Toner was discarded – for a second time.

“I came back in this week and have been calling in the sessions,” confirmed Henderson after missing the Wales game with a medical issue. “I think obviously ‘Cheese’ [James Ryan] has a fair bit on his plate there, and he’s happier for me to do that. We’ve had chats, ‘Cheese’ and I work quite well together.

“So he’s happy enough that I take that off him there and I look forward to it. We’ve had a very good week’s training and simplified a few things down from last week. We took a bit of the detail out of it and are getting guys to back themselves and execute.”

Ryan already handed over this stressful responsibility to the more experienced Henderson when the Ulster captain arrived from the bench at Twickenham.

“I gave him the option,” Henderson explained. “I said, ‘I’m happy to come on and take a non-calling role.’ Cheese obviously had a lot on his plate last week, looking at their lineout, captaincy and other things around, that Cheese wanted to look after.

“So he said, ‘No, when you come on, you call’. Similarly this week, I think he was happy enough for me to take the calling mantle.

“Cheese will look after a lot of the defensive lineouts. We’ll get a few clips together, we’ll look at a fair bit of the opposition and lift a few clips of them in their recent games and feed that back into the forwards.

“So it means the forwards don’t have to look through hours of lineouts; they can leave it up to the people who enjoy looking at lineouts and it works well with Cheese because we’re pretty honest with each other and we know who can get across what work and who can get that detail across to the team best.”

Ryan Baird was being fast-tracked into this Ireland squad until an adductor injury stalled his progress this season but the 21-year-old is expected to challenge the partnership of Ryan and Henderson in 2021.

Henderson’s return feels vital, particularly with Farrell already leaning on an old excuse about the numerical disadvantages facing Ireland when competing with the major rugby nations.

Taking that comment at face value, Ireland are in crisis mode at prop with Tadhg Furlong, Dave Kilcoyne and Ed Byrne unavailable, outhalf without Johnny Sexton and Joey Carbery, centre due to Garry Ringrose and Robbie Henshaw injuries and the back three now Andrew Conway and James Lowe have joined Jordan Larmour on the rehabilitation list.

When Munster’s Shane Daly enters Sunday’s game, Farrell will have handed over 10 first caps in 2020.

“This squad has been absolutely fantastic so far,” added Henderson. “There’s been a lot of queries and questions. New players in, guys mightn’t know their roles as quickly as what they have done in the past, which is like 100 per cent fine – there’s been a huge emphasis on an atmosphere of nobody can ask a wrong question.”

It was not always this way.

“I think that’s something that I’ve maybe been facilitating and answering questions – hopefully putting them at ease and giving them a bit more clarity, not having them worrying or panicking about it if you know what I mean.

“I’m trying to give them as much [peace] of mind going into the weekend as possible because I know all the players in this squad have played incredibly well for their provinces and I think the players who have been in Ireland camp for a while can do is make them as calm and composed as possible so that they can do what they’ve shown, but in a green jersey.”

“Or a black and yellow jersey!”