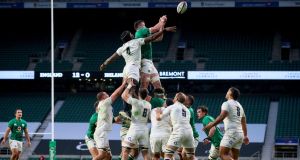 Ireland conceded possession at four of 17 lineouts during last weekend’s Autumn Nations Cup defeat to England at Twickenham, three of which took place within striking distance of the home side’s line. The hooker is usually the first port of call for scrutiny when things go wrong but unless crooked or a discernible overthrow, it’s more likely a system failure.

The official statistics suggested that England didn’t lose a lineout but they conceded possession twice at the set piece, the first when hooker Jamie George was penalised for a crooked throw on 30 minutes and the second occasion, on 50 minutes, when Maro Itoje, under pressure from Iain Henderson, gets a hand to the ball first but Ireland secure possession through Rob Herring.

There are a number of truisms when it comes to the lineout. It is a unit skill made up of moving components that must synchronise to be effective; call, throw, speed on the ground and into the air, and the lift. Not every ball that finishes over the back of a lineout – excluding the ones that are thrown intentionally – is an overthrow.

They were a number of examples of this descriptive anomaly at Twickenham. On 20 minutes Ross Byrne kicked a penalty to the corner and from the ensuing lineout Irish hooker Rónan Kelleher looked to hit Peter O’Mahony at the tail. It was Ireland’s third lineout of the match and on the previous one Kelleher’s throw was adjudged crooked.

Perhaps conscious of it, this time the throw is left of centre, or marginally down England’s side, forcing O’Mahony to chase it one-handed and he lost a little height in tilting to try and rescue possession. The ball wasn’t overthrown per se height-wise, rather it was a slight directional issue as it sailed over the back of the lineout and squirted from Byrne’s grasp as he looked to secure the loose ball. The outcome of the turnover was Jonny May’s second try.

Ireland captain James Ryan clarified that the fault did not lie with hooker Kelleher in explaining why the ball missed the intended target.

England didn’t contest Ireland’s first four lineouts of the match, yet the visitors coughed up possession twice. The first time that the home side decided to go after the Irish throw (fifth lineout), Itoje tapped the ball out of Ryan’s grasp; Ireland’s captain had secured the ball for a split second. Ireland opted to throw to the tail in three of their first six lineouts and won one.

Emboldened by Itoje’s success, England contested three of the next four on the Irish throw without success, albeit that Byrne secured possession from one that eluded everyone. Ireland tried to hit O’Mahony at the front – Itoje put him under huge pressure – but the lift/timing wasn’t great, throwing the Munster flanker off balance in terms of body shape: again not an overthrow if the system mechanics had been right.

England contested the last five Irish lineouts of the match and from the final one, replacement Jonny Hill got a hand to the ball; Herring was going to the tail, the intended area in which Ireland lost three of the four lineouts on the day.

What is disappointing is the fact Ireland had five lineout options in the starting team, Ryan, O’Mahony, Quinn Roux, Caelan Doris and CJ Stander compared to England, who threw 10 balls to Itoje (six) and Joe Launchbury (four).

Ireland’s lineout and defence coach Simon Easterby spoke to the media on Tuesday and explained that the decision making with regard to that particular set piece falls on two players; one who calls the Irish throw, the other who makes the decision whether to contest the opposition ball.

Ireland went after George’s throw on eight occasions, forcing three mistakes, one crooked, one which ended up in Herring’s hands and a third that deflected off Itoje’s fingertips at the tail and fell kindly into Owen Farrell’s grasp. Another time Ryan was penalised for making contact with Itoje’s arm.

Of the four lineouts that Andy Farrell’s side didn’t contest, all were taken at two, three by Launchbury and one by Hill. England used a full lineout almost 50 per cent of the time (five), only opting for a four-man twice, one of which ended up with an Irish scrum put-in. Ireland’s preference was for a six-man (nine occasions) lineout.

England eviscerated the Georgian set piece, a perspective to take into Sunday’s game at the Aviva stadium. The Irish focus will be on reassembling and polishing the component parts, the benchmark precision on every single throw: calling, throwing, lifting and that consistent refinement from match to match.