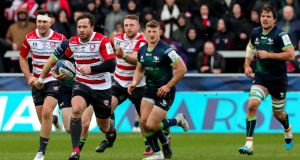 Gloucester’s Danny Cipriani intercepts in the lead-up to his team’s second try in their win against Connacht at Kingsholm Stadium. Photograph: Billy Stickland/Inpho

Connacht have it all to do and more when Gloucester travel to the Sportsground for Saturday’s return Champions Cup fixture.

Having lost the opportunity in England to post a second Pool Five win, Connacht’s hopes of reaching the quarter-finals will be over unless they can turn it around in Galway on Saturday afternoon.

“We need a five-point win on Saturday. If that doesn’t happen, we are definitely gone, but where there is a glimmer of hope, we will keeping chasing that, so we are going to chase it this weekend.”

Openside flanker Colby Fainga’a is ruled out after suffering another injury to his medial collateral ligament which sidelined him earlier in the season. Although “not as bad” as first thought, he will be out for at least two weeks. And still missing from action are Matt Healy, who is back training following a quad strain, Paddy McAllister, Kieran Marmion, Tiernan O’Halloran, Tom Farrell, Darragh Leader, Stephen Fitzgerald, and Gavin Thornbury.

As a result Friend’s selection hand is limited, although Paul Boyle is expected to return to the backrow in the absence of Fainga’a, with Eoin McKeon a likely replacement.

Sunday’s 26-17 defeat in Gloucester extends Connacht’s losing run in England to nearly a decade. Despite being ahead at the break 10-7 last weekend in Kingsholm, Connacht frustratingly left without even a bonus point.

“I felt we were in a good position at half-time,” says Friend. “We steal a lineout off their ball 45 minutes in and have a great opportunity to attack, and instead 30 seconds later we are sitting under our post, which was frustrating. Clever from Danny Cipriani, but we weren’t as clinical as we could have been.

“The intercept had a massive bearing, and 10 minutes later we are down to 14 men and the game is gone. Even after the intercept, I felt there were good battles, but we were the team that broke. [It was] another one where we say we are our own worst enemy.”

However, Friend was also frustrated with the speed of the breakdown.

“Just before the intercept, that ruck ball was six seconds, that was not our fault . . . a body lying in the way. Why is that not a penalty? Should be a penalty. We happen to play out of that, but in that six seconds they have managed to get their defensive line sorted, and come up with the intercept, so we have to be smarter with that.

“That is my biggest frustration with the game of rugby at the moment. You need to preserve time and space for the team with the football. If you are good enough as the defending team to get it legally, then get it legally. Slowing down the ball there to create time to get the defensive line set, then you are going to keep running at brick walls and I feel like that is what we are doing at the moment.”

Now Connacht face a “a hugely important game” which will decide if their seasonal hopes will be restricted to the Pro14 only.

“Saturday’s game is important because it is at home, and after the last couple of performances we know we can to be better, and we need the win to stay alive in the Champions Cup. That was our intention when we came into the competition, and we need momentum going into the next one - so it’s a massively important game for us.”