Cian Healy not taking anything for granted in frontrow battle 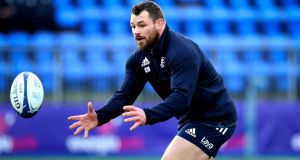 Cian Healy on Leinster’s returning internationals: ‘We came in to train first. We didn’t come in just to jump into a position. We had to work into game minutes and that was the pressure that was there.’ Photograph: Ryan Byrne/Inpho

Last season Cian Healy had played nine Leinster matches before the end of the calendar year. This week brings Northampton in the first of Leinster’s back-to-back Champions Cup fixtures and Healy has played three games with his club for a total of 169 minutes.

Injury-free, he will line out next week at the Aviva Stadium for the return match against the Premiership side. The Irish loosehead prop recognises a different rhythm for the Leinster campaign this year, one that has heavily relied on many of the players who will not make the plane to Franklin’s Gardens this weekend.

It could be a touchy subject within the squad as players filter back in from Ireland assuming starting places straight away. But there’s a rule in Leinster, unwritten. Hotwired to the arguably brutalising system of weekly selection, it is don’t feel sorry for yourself, don’t carry negativity.

Hard-hearted. Healy is assuming nothing.

“We came in to train first,” he says. “We didn’t come in just to jump into a position. We had to work into game minutes and that was the pressure that was there.

“That’s a great thing because it speaks volumes of the squad here that everyone’s standard across the board has been so high that no one has stepped in and is guaranteed a position.”

Healy has had to learn to work more closely with hooker Ronan Kelleher, who has had an awakening this season. The hooker played in two matches last season and scored no tries. Already in seven matches so far including two European starts against Benetton and Lyon, he has had a hat-trick against Ospreys, scored two tries against Connacht and a try in each of the games against Benetton and Dragons.

“Very strong, he’s had an unbelievable start to the season,” says Healy. “He’s big, physically strong, athletic. He’s doing all the right things and scoring a lot of tries so it’s nice to have two hookers who can do that more, we’ve a load of them.”

Seán Cronin, currently recovering from a neck injury, has been the tried and trusted try scorer with Bryan Byrne and James Tracy the other hookers on the Leinster roster. There are six other props as well as Healy – injured Vakh Abdaladze, Michael Bent, Ed Byrne, Peter Dooley, Tadhg Furlong and Andrew Porter.

But as a player Healy is wedded to the next day, the next match view. His injuries are for the grandkids but caution is embedded in his DNA not to lurch too far ahead into Andy Farrell’s head or the Six Nations Championship.

“I’m enjoying what I’m doing and loving it,” says Healy. “I’m loving the challenges that are being set down so the most enjoyable way to do that is going week to week and not expect much from further beyond that.”

After a challenging summer, the prospect of a season that could stretch as far as May, if Leinster make it to the latter knockout stages of the Pro14 or European Champions Cup, could seem exhausting. No chance.

“They’ll look after us,” he says. “They’ll pick when we should rest and when we’re down to play. It’s just up to us to perform and that’s the great thing about it, we’re not getting rolled out for every game of the season and by the end of the season be a physical wreck.

“So we know that when we’re in club that you play when you’re picked to play and perform at the best level you can because every three or four [matches], you get rested, and that’s the longest run that you’re going to have to do. So mentally, you don’t have to get around that because that’s the way the system is.”

But in Northampton little will distract Healy from what a challenge the set-piece will be. With two Rugby World Cup titles to his name and 108 caps for the All Blacks, prop Owen Franks followed his older brother Ben and coach Chris Boyd over to Franklin’s Gardens this year with one of the most complete career accomplishment lists in world rugby.

“Ah he’s technically very good, very strong, very athletic, a dangerous player,” says Healy. “He’s got a lot of experience under his belt. He’s someone who knows how to move and shift in the scrum and can do so around the pitch as well.

“So we’ll probably look to take the energy out of the scrum and work them a bit harder, but they’re very fit so we’ll have to work them quite hard.”

A long shift there. But plenty of reinforcements.