Andy Friend has Connacht on guard to Gloucester’s wily ways 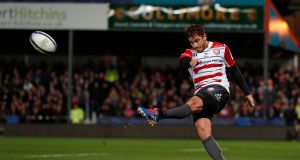 Andy Friend knows that Gloucester outhalf Danny Cipriani can dominate a game if he gets into his stride. Photograph: Adrian Dennis/AFP via Getty Images

Andy Friend is preparing his Connacht squad for everything Gloucester can throw at them in Sunday’s Champions Cup clash, on and off the park.

The former Harlequins head coach remembers visiting Kingsholm more than a decade ago, its passionate supporters, but most memorable was the ruse Gloucester pulled in the dressingroom.

“I remember going for the captain’s run the day before the game and in the away changingroom all their lineout moves and scrums were up on the white board and I could see the players’ eyes light up. I said ‘do not fall for that’ but some of them did – the oldest trick in the book.

“That was back then and they were cunning enough to be doing that, and it probably tripped a few of our young blokes up.”

Needless to say Quins didn’t win. “We were waiting for moves we’d read that were never going to happen.”

However, he says, Kingsholm remains a “tricky spot”, probably more so with the English Premiership outfit trying to break a run of five successive defeats.

“They have quality backs and forwards, and coming off the bench, they have some amazing quality. And I am sure they are looking for the things to right, and looking at this weekend to do that, so our job is to stop it.

“If you give the supporters’ shed a reason to be loud, they will be loud and the team feeds of that. And Danny Cipriani, everyone has seen what he can do on a football field, and if he is on song, they become a more difficult team. So it’s our intention to make sure he’s not on song and for us to stick to what we do well and build pressure on them and hope it’s enough that we get the points.”

This fixture is key for Connacht. Just two points separate the two clubs in pool five – Connacht with four points from their win over Montpellier in the Sportsground while Gloucester, yet to win, have two bonus points. A win for Andy Friend’s side would ensure they double their lead over David Humphreys’s Premiership outfit, which must travel to Galway for the return fixture next weekend.

“We know they have an attacking threat, a big forward back, and if Danny Cipriani is on song, he adds to that. It’s Champions Cup rugby, the sole mindset is to win this game,” added Friend.

Connacht have no fresh injuries to report from their Pro 14 bonus-point win over Southern Kings last weekend. Ireland scrumhalf Kieran Marmion remains sidelined with a back injury, but hopes are high he will be back for the interpros; similarly Tiernan O’Halloran following his fibula break. Backrow player Eoin McKeon has returned to training, and is expected to be available for the return fixture.

Connacht have suffered five heartbreaking defeats to Gloucester in European competition, but Friend insists that is in the past.

“We are not going with a theme this week, but the obvious one is to get the eyes up. There will be a lot of space and things happening, so it’s get the eyes up and react.

“We’ve been together 23 weeks this year, so we know each other, we know our game, we know what we are meant to be doing, so let’s go and play our footy and get back to the basics of rugby and expect the unexpected against this mob. Be ready for that and deal with whatever comes.”

1 Colin Kaepernick’s exile is too fresh for NFL to speak out on US protests
2 Ken Early: Why international football is fading into obscurity
3 IRFU plan gives club rugby hope of return to action this year
4 Connell losing touch with club championship is real tragedy of Normal People
5 ‘A radical departure’: Who are CVC and what are their plans for rugby?
Real news has value SUBSCRIBE