Neither Ringrose nor Leinster resting on their laurels 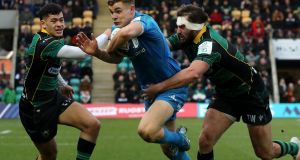 Honesty is an important character trait in the fulfilment of potential and the pursuit of excellence, so too diligence in absorbing on-field lessons.

Garry Ringrose has never shied away from discussing performance imperfections and it is that attitude coupled with an aptitude to learn that has enabled him to become an excellent player.

As part of a wide-ranging discussion on why Leinster endured an uncomfortable first half defensively against the Northampton Saints at Franklin’s Gardens he typically pointed to a couple of his errors. He explained: “I think it’s always a work-on for me. Even Saturday, it was evident and I learned a few tough lessons.

“Certainly off the first play when [Rory] Hutchinson put it [the ball] across my face and then I got my head caught on the wrong side, I was arguably just a little bit narrow, [too] close to Robbie [Henshaw]. James [Lowe] did well to recover and cover my back a bit, which happens quite a lot with the wingers adapting. So it was good that he was switched on and was able to cover.

“They ultimately got us two or three phases later. I could be a bit smarter as to what happens next after missing the tackle. And then there was the play off the lineout, [when Matt] Proctor went through. So again, these are just lessons I have learned.

“It does happen sometimes where I make the read and they play a guy out the back, and it looks like I have done well, but I know in my head that if they played the front door, they would have exposed my inside shoulder. Even when you do a successful defensive read, there are still always learning opportunities. It’s just a bit more obvious when they make a line break.”

Defending in that channel requires good instincts, good habits, the cohesion of the players inside and outside, and every now and again a dollop of good fortune. What can appear like a missed tackle is sometimes a good play in cutting off the outside channels and forcing a player back inside, where he can be gobbled up by the cover.

“In certain areas if you can bring outside pressure and force attackers back in to where there is a bit more clutter, it can go down as a missed tackle but ultimately it benefits the team. I think any defensive set requires all 15 guys to be clued in; starting from the back-field being covered to the front-line being covered to good decisions in and around the breakdown, good decisions in the wide channels and then ultimately, being positive in the contact area. There are all these intricacies that need to happen.”

Leinster, collectively, received a bit of a dressing down at half-time, and the response in the second half was impressive.

When the squad reconvened on Monday one thing emphasised in a team meeting was what happened six years ago when the Irish province thumped the Saints 40-7 in Northampton only to lose 18-9 to the English club the following week at the Aviva Stadium, where the two clubs meet again on Saturday (5.15).

Ringrose said: “We were referencing learning that the hard way in 2013. It is kind of weird that you have to go back and play the same team again because it rarely happens other than this time of year. There is no shortage of motivation because we know how good they are and how the scoreboard flattered us a bit. They will improve and be better with the personnel that they have and also how well coached they are.

He pointed out how Northampton opened up Leinster a few times during the first half as a salutary warning for Saturday. Ringrose says Leinster’s key focus is on getting their own performance right, irrespective of what Northampton team arrives at the Aviva and what others perceive will happen.

The absence of Johnny Sexton (knee) and Ronan Kelleher (hand) and with James Ryan (head) a doubt will necessitate a reshuffle to the starting team.

Pride will be a galvanising factor in Northampton’s response just as it would have been had the roles been reversed.

“We reviewed it [last weekend’s game] and we are under no illusions about where we are or where we need to get to. Everyone had elements of the game that they will look into and try and be better on across the board from 1 to 23. A team of their quality will definitely want to react.”