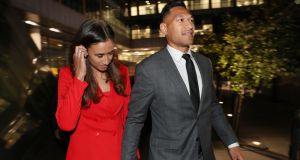 The long-running legal dispute between Rugby Australia and Israel Folau has ended with a settlement reached over the former Wallaby’s sacking in the wake of an anti-gay social media post in April.

RA apologised to Folau in a joint statement issued on Wednesday that draws a line under the bitter affair, although the exact terms of the settlement will remain confidential.

The parties have been involved in mediation this week over Folau’s $14 million (€8.7m) compensation claim after the former rugby league and AFL player claimed his dismissal by RA and Rugby NSW was unfair, following his post on Instagram that hell awaits “drunks, homosexuals, adulterers” and others.

A statement from RA, RNSW and Folau said the post reflected Folau’s “genuinely held religious beliefs” and that he “did not intend to harm or offend any person when he uploaded the post”.

“Mr Folau wants all Australians to know that he does not condone discrimination of any kind against any person on the grounds of their sexuality and that he shares Rugby Australia’s commitment to inclusiveness and diversity,” the statement read.

RA said it did not agree with the content of Folau’s post, before each party wished the other well for the future. “Inclusiveness is one of rugby’s core values and it welcomes all people to the game, including all members of the LGBTI community,” the statement continued.

Folau’s four-year, $4 million (€2.5m) contract was ripped up in May, after an independent panel hearing found his social media post to have breached the terms of his employment, effectively ending his rugby union career in Australia.

The 30-year-old had argued “no Australian of any faith should be fired for practising religion” and sought “substantial remedies” from his former employers. His initial claim of $10m (€6.2m) was increased to $14m (€8.7m) last week.

On Monday the chief executive of Rugby Australia, Raelene Castle, claimed Folau had admitted his comments caused harm but would not hold back from posting whatever he liked.

Folau has continued to court controversy since his sacking, most recently attracting criticism for comments he made during a church sermon when he implied the devastating bush fires on Australia’s east coast were God’s punishment for legalising same-sex marriage and abortion.

News of Wednesday’s settlement was welcomed by Equality Australia, who said it put an end to a “divisive and hurtful period for LGBTIQ+ people in rugby, in sport and more generally”. - Guardian