Despite disappointing draw with Racing 92, Peter O’Mahony feels his side held their own 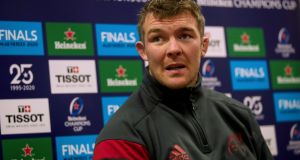 The sight of Peter O’Mahony and CJ Stander (not once, but twice) offloading the ball, the former in his own half, at Thomond Park on Saturday night was not only further evidence of the dramatic effect Stephen Larkham is having on Munster, but also gave the lie to the notion that you cannot teach old dogs new tricks.

Offloads were never a notable feature of Ireland’s more prescriptive rugby, which yielded unparalleled success until this year, but a striking feature of the early Euro skirmishes has been the palpable degree to which the front-liners have embraced the freer approach adopted by the provinces.

Like this game itself, it has been an antidote to the disappointment of the World Cup.

This has been particularly so for the likes of O’Mahony and Stander in returning to a Munster squad which had already begun to adopt the ambition being fostered by Larkham.

When asked what Larkham’s influence has been like, O’Mahony was not being critical of the Irish set-up when admitting: “It has been great, it’s been really refreshing. He has definitely given us licence to go and play some ball, which is really enjoyable.

“Training has been really enjoyable, we have had a lot of work to do to get up to speed with regard to plays and the likes, everyone has really enjoyed working under him for the past month or so.”

O’Mahony’s performance, no less than Munster’s overall, was not without its blemishes, and the skipper was still irate with himself for their line-out difficulties under typically immense pressure from Donnacha Ryan and co, as well as being out-foxed by Finn Russell for the Parisians’ third try.

Munster missed 23 tackles (albeit Racing missed 30 in a game where footwork was a repeatedly thrilling feature) and defensively, O’Mahony acknowledged, they could have been better.

Overall, it probably flattered us a bit getting the draw with the way they played and the overall way we played

“One hundred per cent, yeah. Defensively some lapses mentally, just small things we could have sorted ourselves to stop them. Jez [Jeremy Loughman] is struggling, I missed a tackle on Finn Russell, show-go.”

Reflecting on Munster being outnumbered on the blind side for the Teddy Thomas try, O’Mahony said cryptically: “Short side – we should have sent one more down the short side. Small things, but they count against teams with the class they have.”

Overall, he also conceded: “I thought they played really well and we played some really good rugby as well but overall, it probably flattered us a bit getting the draw with the way they played and the overall way we played. That would be my gut feeling.”

They were, as O’Mahony put it, “on the ropes” for much of the third quarter. “But we stuck at it, stayed at it, showed up defensively in important moments, got the ball back with a couple of big plays and got ourselves down there. We’re never a team to roll over, particularly not at home, and we ground out the two points, which will stand to us.”

Nor did he feel JJ Hanrahan should be too harsh on himself for failing to land the drop goal which would have sealed another comeback win snatched from the jaws of defeat.

“Yeah, back from an injury and an 80-minute performance. He kicked an incredible conversion to get us two points. They’re pressure kicks, you know? That fella trains harder than anyone.

“He’d be disappointed himself after but he shouldn’t be. I thought he had a class performance and that conversion was certainly out of the top drawer.”

Ultimately, a home draw would appear to have left Munster on the back foot a little.

“It’s not ideal,” admitted O’Mahony. “We want to win at home every time we play here, certainly, but the last couple of years we have been in much the same position. The bonus point last week could be really important to us, we ground that out.

“That will stand to us, certainly. Seven points, two wins without a bonus point is eight, it will stand to us, 100 per cent. We could be sitting here with four last week and none tonight. That would be a different kettle of fish, so we will take what we have got and battle on with it.”