‘I don’t think we played well enough to win the game, to be totally honest with you’ 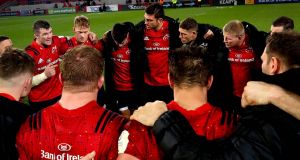 Draws, by their nature, can never be entirely satisfying and Munster’s sharing of the four match points with Racing was very much a case in point. Munster’s regret will be two-fold, as they were the home side and had engineered what seemed a gilt-edged chance to win it.

Again that though, as Peter O’Mahony, admitted, they were “on the ropes here” against a potent Racing side for much of the third quarter, and his gut feeling was that Munster hadn’t played well enough to earn a win.

“It’s kind of hard to say,” admitted the Munster captain when initially asked whether the draw was a positive or negative result.

“Around 50 minutes we shouldn’t have been next to or near a draw and then with 10 minutes to go, we could have won it. I don’t think we played well enough to win the game, to be totally honest with you. We played some very good rugby but some mental lapses defensively cost you against teams like that.

“I thought they played really well and we played some really good rugby as well but overall, it probably flattered us a bit getting the draw with the way they played and the overall way we played. That would be my gut feeling.”

This is the third season in a row that Munster have drawn one of their opening two pool games and Johan van Graan, for his part, took some solace in them being in a near identical position at this same juncture in the last two campaigns.

“Obviously you’ve got to take history into consideration as well. In the last two years we drew our first game and won the second one, and this time around we won our first one and drew our second one. That bonus point away (against the Ospreys) last week was a big moment and the fact that we leave here with two points all, we’re top of the group jointly with Racing with four rounds to go.

“Obviously the double header against Saracens is the next step in terms of Europe, but we’ve got Edinburgh next up. What we’ve learned in this competition is you take the points on offer. We got ourselves in a winning position. Unfortunately, it didn’t go over. That’s just rugby.

“I said to the players afterwards as a coach all you can ask is that they gave everything they got and we did. The players most certainly did. Racing from minutes 50 to 60 put a big squeeze on us, two/three phases put it in behind. I think it was something like three 22 metre drop outs in a row they put it in behind us, we dotted it down and went again. So they were also playing for field position.

“We got that scrum penalty, and we got some field position and we unfortunately couldn’t get a penalty advantage at the end and we had to go for a drop goal, and unfortunately it went to the left.”

In order to even have the chance to draw the game, much less win it, Munster had to cling on for dear life in that third quarter as Racing, ahead 21-14, probed for the try that might well have put the game beyond reach, as Munster’s backfield covering saved tries on three occasions and Teddy Iribaren also missed a penalty.

“You see that the players gave it their all. I thought the crowd played a massive part. You’ve just got to keep hanging in there. We made a few big calls in the first-half to go to the corner and it paid off with Earlsy’s try. In the big matches, like you saw out there today, it’s inches literally right through the game, and we held on and we held on, and we got some momentum and we scored that try, we got ourselves literally within one kick of winning this game.”

The match marked Alby Mathewson’s last outing with Munster and, in the continuing absence of David Kilcoyne, their resources have been further stretched by the ankle injury which Jeremy Loughman suffered. To compound this, the loose-head was hobbling and could not be replaced when Finn Russell darted between Loughman and O’Mahony to put Juan Imhoff over for Racing’s third try at 14-all in the 48th minute.

“From the coaches’ point of view we immediately saw that he was in big trouble, and knowing Jeremy, like all of our players, he got back up into the defensive line and obviously Finn Russell is a world-class player,” said van Graan.

“He spotted that and that’s just the way the game goes. He gave it his all and unfortunately he got past him and that’s how they got their third try. You couldn’t fault Jeremy for it, considering his ankle was gone and he still got back up. The easy choice is to stay down, but he got back up. Incredibly frustrating that that led to seven points but that’s just the way rugby goes.

“But big credit to him for getting up and trying to hold the line. It was a massive moment in the game because we had just got back in the game. It was 14 all, if I’m not mistaken, and they just went immediately went to 21-14 and we had to find our way back again.”

Reflecting on the game overall, van Graan said: “It was a very tough game of rugby. Two heavyweight boxers who went at each other literally until the last second of the game. I thought they started pretty well. We came back. We had that chance where we were five yards short about 10 minutes before halftime. Scored just on the stroke of halftime. I thought we played some really good rugby in the first half. Big breakdown battle. Fell behind in the second half, came back.

“I thought our bench made a big impact. We got ourselves back to 21-21 with that try - brilliant conversion from JJ from the sideline. We fought back, an incredible kick from Earlsy to get that lineout.

“We kept punching in a drop goal position and unfortunately it went to the left. If that goes over, it’s a different ball game but all credit to Racing as well. I thought both teams came to play very positive rugby. It’s like last year’s draw in Round 1, you could have lost it and you most certainly could have won it there right at the death. We’ll take our points and move on.”