New ground has been broken in Larkham's Munster revolution 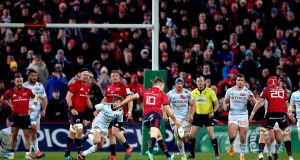 Fittingly for their first draw in 79 home games which have liberally garnished the Champions Cup, this was new territory for Munster in many ways.

Revamped attacking games normally take time to evolve, all the more so when a raft of front-liners are added to the mix over two months into the competitive season, but Munster made it clear here that they are intent on embracing the Stephen Larkham-inspired revolution without delay.

In many respects this was the first real sighting of New Munster – certainly in front of the faithful – as they engaged an expansive and creative Racing 92 with like-minded width and wit.

JJ Hanrahan and Mike Haley are like players reborn. Hanrahan has been encouraged to take the ball to the line and use his running threat, while likewise Haley has been given licence to carry and counter.

Hanrahan should not beat himself up too much for hooking the drop goal to win the match after his skip-two floated pass to Andrew Conway and touchline conversion drew the sides level.

With Finn Russell and Simon Zebo very much cut from the same cloth, it reflects the width that both teams employed that all four wingers scored tries.

It was often high-risk, high-wire rugby. Munster pushed the pass or the offload in spite of Racing’s line speed forever carrying the threat of an intercept.

As expected Donnacha Ryan and Racing also went after the Munster lineout, and not only did Munster lose three of their 10 throws, but of those three were thrown flat to the front like something from an imbalanced under-12s game. No less than the lineouts and scrums, the breakdown was a serious battle.

Yet Larkham’s influence has been profound. There have already been signs of much improved use of the blindside. This was demonstrated by the key try on half time when quick hands by Hanrahan and Haley in a four-on-three enabled Keith Earls to beat Zebo on the outside.

There have also been some inventive new strike plays, such as the one from off-the-top lineout ball early in the second-half when Earls took Murray’s pass as first receiver fired a left-to-right pass along the gain line. Chris Farrell charged onto the ball, fixing the defence, but pulled it back for Rory Scannell to free Hanrahan on the wrap, so creating a three-on-two.

Juan Imhoff and Zebo defended it well, but after one of 15 carries by Haley (beating eight defenders and gaining 119 metres) it led to the penalty by Hanrahan which levelled matters at 14-all.

“From a Munster growth point of view we as coaches just spoke inside that some of the things we’ve done tonight are some of the things you won’t have seen Munster do in the previous few years,” admitted Johann van Graan afterwards.

“So, yes, we are going to throw one or two that is going to lead to turnovers but if you look from a clinical rugby point of view we have done some incredible stuff over the last few weeks,” added van Graan, who stressed that this process would take time.

The examples of Hanrahan and Haley are cases in point. “JJ just came back from an injury and obviously he played 80 minutes tonight. One of the things we decided is we have got to make our fly halves fitter and he certainly did that.”

“The same with Mikey. He’s in his second season with us. Steve has said so many times in the last few weeks that he’s a champion of a man, and that’s why I got him to Munster and his experience and the way he talks specifically to the backs he gives them confidence.

“We are trying different things, and we just want to become better. And hopefully in the new few months and years we will become a very good rugby team.”

Munster were often on the back foot, leaking tries on each of Racing’s first three visits to their 22.

Racing’s first try by Russell was a product of his typically sublime use of his deft kicking game with a penalty advantage – admittedly when Matthew Carley harshly decreed that Rory Scannell illegally went for a poach after making a tackle. Dropping the ball to his “weaker” left foot, whether Russell meant to then nutmeg Scannell only he will know, but he re-gathered in the blink of an eye to score.

Zebo’s carrying helped create Racing’s blindside overlap for Teddy Thomas to score with his chip and gather from Teddy Iribaren’s skip pass, and Russell may have spotted Jeremy Loughman hobbling with an ankle injury he had sustained moments before when using Zebo’s decoy run to show and go between the prop and Peter O’Mahony to send Juan Imhoff over.

It remains a mystery why Thomas and Imhoff were considered surplus to requirements by France and Argentina in the World Cup. Thomas has now scored 18 tries in his last 22 games, so it’s certainly not a form issue.

The Parisians look like serious contenders on this evidence.

Man United could stop Bruno Fernandes from playing for Portugal in March 09:31
Another stalemate for Man United; Robbie Henshaw leading the way for Ireland 07:54
Continued absence of anti-doping tests for GAA intercounty elite 06:44
Irish contribution to Ali-Frazier bout that brought the planet shuddering to a halt 06:00
Her Sport putting women’s sport firmly centre stage 06:44
Crossword Get access to over 6,000 interactive crosswords