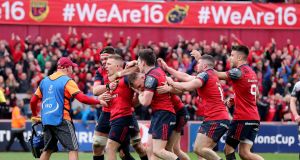 As they know too well, Munster have not won the Heineken Champions Cup since 2008. They and their supporters may have become a little frustrated with the apparent glass ceiling which the semi-finals represent for them, especially lately, but Munster have remained an enduring powerhouse in European rugby for the last 21 years.

They have reached the knockout stages 18 times in the last 21 years, qualifying for the semi-finals on 14 occasions – a tournament record. Such consistency has been founded on their remarkable home record, not least in their Thomond Park citadel, which has, aptly, been something of a fortress.

In addition to winning three home games out of three at the pool stages in 18 of the last 21 years, in Munster’s 10 quarter-finals at home (another tournament record) they’ve won nine, the only exception being when Ulster stormed Thomond Park in 2012.

Nothing epitomises Munster’s fortress mentality than their record against Top 14 teams, against whom they have won 30 of 31 home matches, all but four of which have been in Limerick. The one defeat was in December 2014, when Clermont won 16-9 at Thomond Park, one of only five defeats Munster have suffered in 78 home games.

Even in Clermont’s case, their win was after two previous defeats in Thomond Park, and they are one of 11 different Top 14 sides to experience that losing feeling away to Munster in the competition’s history. It comes as little surprise to learn that Castres have been the most frequent visitors, losing on all seven occasions they have visited.

The first French side Munster hosted were Bourgoin in September 1997. The tournament had yet to catch fire. In pre-Red Army days, the attendance was given as 6,000. Munster were losing 15-12 entering the last play of the game when John Lacey, who would go on to become an international referee, scored in the corner.

“I remember celebrating on the way over the line, holding the ball one-handed with my other hand in the air,” recalls Lacey. “Declan Kidney nearly killed me at the Monday morning review. That brought me down to earth, after thinking I was the hero in the papers, and he was 100 per cent right. I never did it again. It was a horrible game in wet conditions and the crowd wasn’t that huge.”

To put the importance of making Thomond Park a fortress into context, this win came in the wake of 48-40 and 43-23 defeats away by Harlequins and Cardiff. Munster would also lose against Cardiff in Musgrave Park a week later, and away to Bourgoin, before beating Harlequins (Keith Wood et al) 23-16 on a raucous day in Thomond Park.

Munster lost seven of their first dozen games in the competition, including a 60-19 battering by Toulouse. Four of the five wins were in Thomond Park. Back then the Limerick fortress mentality was about all Munster had. It might have been all so different had Munster not beaten Bourgoin that day.

Thereafter the French came and went away licking their wounds without fail. Perpignan, the second most frequent French visitors, were outwrestled in a Musgrave Park mudbath when the game was moved there due to Thomond Park being waterlogged in October 1998. The Cork stadium was also the venue where Colomiers and Castres fell in the following seasons.

In between, the first of six quarter-final home wins over French opposition was against Stade Francais in April 2000, when Wood – in his one European campaign with Munster – drove Diego Dominguez to distraction in a masterplan hatched by manager Brian O’Brien en route to their first final. Ronan O’Gara’s metronomic kicking augmented tries by Dominic Crotty and Anthony Horgan.

A high-class Biarritz team were beaten in the quarter-finals a year later in a game notable for Anthony Foley’s hat-trick, and a similarly helmeted Alan Quinlan sheepishly received the man-of-the-match award amid ribbing from teammates that it had been a case of mistaken identity. Again O’Gara, with seven penalties and a conversion, accounted for the rest of the scoring.

Stade were made of sterner stuff in another quarter-final meeting in April 2004, each side scoring four tries in a 37-32 rollercoaster. This time O’Gara’s 17 points added to tries by Marcus Horan, Shaun Payne, Rob Henderson and Mike Mullins.

The rivalry with Castres was still bitter when they were thrashed in successive seasons, but arguably the most important of the 30 wins at home to Top 14 opposition was the only one to take place outside of Munster, when they hosted Perpignan on April 1st, 2006, in front of 48,500 supporters at Lansdowne Road.

Trailing 10-7 at half-time after Paul O’Connell scored their only try, O’Gara kicked four second-half penalties in a bruising forward battle for which Munster were given insufficient credit after returning ‘cold’ from the Six Nations.

Leinster had won a thriller beforehand that Saturday away to Toulouse, but three weeks later Munster returned to Lansdowne Road to beat Leinster 30-6 en route to finally reaching their holy grail against Biarritz in the Cardiff final.

Of course, there were a few tight squeezes along the way, none tighter than the opening game of the 2008-09 pool stages against little Montauban. Making their debut in their only Heineken Cup campaign, Montauban picked a largely second-string side featuring the former Connacht lock Rowain Frost and ex-Scottish lock Scott Murray in the second row.

It was also a Friday night game to mark Munster’s first European game in the rebuilt Thomond Park, ensuring traffic chaos on the roads into Limerick and the ground, and meaning many of the 23,500 crowd arrived late, not least those driving from Cork.

A deathly silence fell over the ground when Montauban’s Romanian scrum-half Petre Mitu kicked the French minnows in front four minutes from time before a questionable penalty award by Wayne Barnes enabled O’Gara to nudge Munster ahead two minutes from time.

A week after Munster escaped from the Stade Marcel Michelin with a losing bonus point in the same pool campaign, this time Clermont were in full metal jacket mode but when all else failed a fight usually roused the Thomond Park faithful.

So it was when Jamie Cudmore was red-carded after instigating an exchange of punches with O’Connell. Even so, Munster needed two late tries by Marcus Horan and Niall Ronan, with a stunning chip and chase, to seal the win.

Toulouse would be spooked by the Thomond Park factor

Clermont eventually proved too good in December 2014 when leading all the way after an early try by Man of the Match Fritz Lee.

Toulouse would be spooked by the Thomond Park factor on the second of two overdue quarter-final visits, and Munster have won their last seven on the bounce at home to French opposition, none more memorably than through Andrew Conway’s superb solo try in the quarter-final against Toulon two seasons ago.

They’ve also won their three home games against Racing at Thomond Park, each of which helped secure qualification for the knock-out stages.

As on so many occasions in these 30 victories over Top 14 rivals, Munster’s ability to defy the financial odds against them in their fortress has been critical to their European ambitions.

As it will be again today.

Munster’s record against French opposition at home in the Heineken Champions Cup: