Ulster without injured McGrath for visit of formidable Clermont 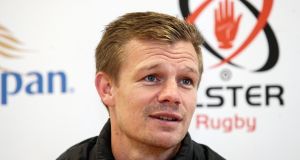 Dwayne Peel: “We know they [Clermont] have done pretty well in the Top 14. They are coming off the back of a big win and they have a big history in this tournament.” Photograph: Jonathan Porter/Inpho r

Despite the momentum Ulster have built up after round one of the Champions Cup there is a down side as prop Jack McGrath will undergo surgery to a thumb injury sustained in the win over Bath last week. McGrath left the pitch early in the game and according to Ulster his fitness will be “monitored over the coming weeks”.

Ulster suffered a number of injuries in their one-point high-wire act at The Rec but remain upbeat about their prospects against Clermont this Friday in Belfast.

Lock Sam Carter departed the Bath match with his shoulder wrapped in his shirt, a sure sign he suffered a dislocation. Requiring surgery, the injury will put him out for approximately three months. Try scorer Rob Lyttle will also miss the rest of this year, again with a shoulder injury that is expected to see him sidelined for between six and eight weeks.

But Ulster have huge expectations and no more so than from scrumhalf John Cooney, who picked up the man of the match award. Clermont will arrive with French international Morgan Parra and Scottish scrumhalf Greig Laidlaw.

Parra started the game last week in the French club’s 53-21 win over Harlequins but on the hour gave way to the Scot, who landed two conversions during his limited time.

A decorated scrumhalf with Wales, Ulster assistant coach Dwayne Peel can take some comfort from Cooney’s form which he decorated with a breakaway try.

“I think Parra has been there at Clermont for is it 10-12 years. He’s a fantastic player, fantastic talent at nine and I really like watching him play.”

Clermont play a lot off their nines but also have size and strike power out wide as well as the kicking game from Camille Lopez at outhalf.

But it was the Fijian duo Peceli Yato and Alivereti Raka who were hot on the day against Harlequins with their power running at the visitors’ defence earning them two tries each. Yato was also denied a hat-trick due to a knock-on.

“They are definitely a different challenge,” said Peel. “They obviously have quality at nine, international experience at nine but they also have so much fire power as well. They’ve got big runners, big men in wide areas and big men up front so that brings a new challenge. The likes of Yato and Raka on the wing. These are big men. We have to make sure we are on the money to counter that.”

Peel is aware Ulster have shown some inconsistency this season, a flaw that could be harshly punished. Nor does he believe in the old cliché about the French not travelling well outside their strongholds.

“I don’t think they will not travel well. Historically they have travelled well in Europe. I watched the game the year before I came here. It was a really exciting game, a real competitive game.

“The history is the history. But the big focus for us is the now. We know they have done pretty well in the Top 14. They are coming off the back of a big win and they have a big history in this tournament. We will give them the respect they deserve but if we play to our potential we could make a good go of it.”