Guarded satisfaction from Sexton after ‘arm wrestle’ with Lyon 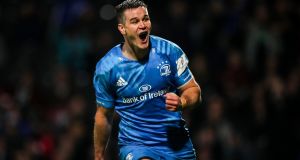 Maybe the guarded satisfaction was due to the heights to which Leinster and Johnny Sexton know they need to reach in order to win the Champions Cup. But as the team left France on Saturday night with a dogged and valuable win against Lyon, there was as much to ponder as there was to love.

No mistaking it there was pride taken from this defensive scrap; a team that dug in and put up a gritty, largely controlled performance in greasy and hostile conditions.

Prudent and judicious might better describe the decision to challenge Lyon to break down the Leinster line that hung in tough, especially late in the first half when Jordan Larmour was in the bin and the home side was like crashing surf into the Leinster 22.

It was “an arm wrestle”, said captain Sexton, who typically kicked his points and eagerly threw himself into the rough and tumble, drawing particular off-the-ball attention from the impressive Lyon No 8 Carl Fearns.

“Look, I was happy with the defensive side of things,” said Sexton. “He wasn’t happy with me afterwards because he felt I went down easy. But I was getting up and I got hit off the ball. I’m sure when he looks at the video he’ll see that.”

But Sexton and Leo Cullen know the pitfalls of Europe better than most, and Sexton also drew on the Saracens final of last season and saw comparisons of detail in Lyon that should be fixed but had hurt them in Newcastle.

Robbie Henshaw’s vision to make the break but take on a tackle rather than release James Lowe on his right shoulder in the first half; the excellent James Ryan sweeping forward and sidestepping to create space before being tackled by covering fullback Toby Arnold with three backs to his right in empty space.

All nitty-gritty in an otherwise character-building win, but as Leinster look forward to Northampton and to Italy for Treviso, the minutia of inaccuracies in Lyon and the Saracens final chimed with Sexton’s bigger thinking.

“The big games the margins are so fine, so small. They do come down to swings in the games,” said the outhalf, who earned man of the match.

“Go back to the Saracens final. We’re 10-3 up start of the second half, and we’ve a clear chance to score, two clear chances to score, and we don’t take them. If we can get that to 17-3 it’s a much different game.

“They get a boost and they get a chance to score, and they take theirs, so it’s honestly those small things. It’s a great lesson to learn at this stage, having won, and it’s important that we learn lessons now after a victory.

“Yeah, we’re happy with the win,” he added. “I suppose the attitude that we had if you compare it to when we went down to Toulouse last year having got a five-point victory over Wasps, where we lose. We weren’t ready for the battle that day.

“Today was much better and I’m proud of how we turned up. But like I said when you don’t take your chances – we had a few of them – that makes it a really difficult game in those conditions.”

Leinster at their soaring best is always Europe, and while they face an important away Pro14 trip to Glasgow at the weekend before back-to-back matches against Northampton, they could be lulled into thinking of a perfect run to Christmas without being beaten.

Northampton have burst to life. One of the reasons for that is change in Franklin’s Gardens. Chris Boyd, their New Zealand director of rugby, arrived in 2018 with a background at Wellington, the New Zealand under-20 national team and the Super Rugby franchise Hurricanes.

“Yeah, the last time we played them was a few years ago,” says Sexton. “They’re sort of where we were a few years ago when we were not getting the right results and we were struggling for form. Then suddenly – it just takes a couple of personal changes whether coaches, staff or a new signing – and you are a brand new team and that’s exactly what has happened there.

“They have just gone from  being in a relegation battle to top four to now being real contenders in this Champions Cup. You look at their team and they are littered with guys that are in great form after a World Cup and are real threats.

“To go to Treviso it takes a good side to go there and get five points and put them in a good position. Yeah, we’ve got a big game coming up in two weeks.”