Ulster take control of Pool 3 as Clermont crumble in Belfast

John O'Sullivan at the Kingspan stadium 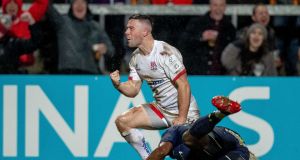 On a wet, windy Belfast night, Ulster once again thwarted Clermont Auvergne, the third occasion that they have had the measure of the French club in a Heineken Champions Cup pool match. A losing bonus point represents a consolation of sorts for the visiting side and one that they arguably didn’t deserve on the balance of the 80 minutes.

Ulster won’t care unduly, preferring to luxuriate in a win that was largely down to a magnificent performance from the pack, with Marcell Coetzee outstanding and two tries, one well-worked and the other a wonderful piece of opportunism from John Cooney.

It was never going to be a blemish-free performance but head coach Dan McFarland won’t be happy with the discipline as Ulster conceded 15 penalties, 11 in the second half and more than a third at scrum time. It won’t take the gloss off a win in which Coetzee and Will Addison stood out but, one to which every player contributed.

Ulster took the lead after just two minutes, scrumhalf Cooney landing a 32-metre penalty after Clermont flanker Peceli Yato was pinged for not rolling away at a ruck. The Fijian would have a central role in the opening 40 minutes, cast as the villain on 34 minutes when with Ulster on the attack and with a numerical advantage just outside the Clermont 22, referee JP Doyle blew his whistle in good faith, believing Yato to have suffered a serious injury.

The fact that he jumped to his feet moments after the whistle was blown earned him a telling off from the referee and the ire of the home supporters. It was not something that will reflect well on him. His team-mates wouldn’t have been enamoured with him either less than a minute later as he conceded a second penalty, which Cooney kicked to nudge his side into a 13-3 interval lead.

The home side dominated territory and possession in those opening 40 minutes, tagging on a try from flanker Jordi Murphy, which Cooney converted, and Ulster should have been even further ahead as the scrumhalf decided to set the last defender rather than pass to two supporting players, either one of whom would have crossed unopposed.

To compound matters Cooney lost his footing and knocked on. Billy Burns gorgeous chip and Stuart McCloskey’s catch and inside pass deserved better.

Twice the home side might have conceded tries to Alvereti Raka, on both occasions the Fijian born, French international wing winning the foot race onto grubber kicks; the first time a heavy touch with his boot sent the ball over the deadball line, and minutes later he was adjudged to have knocked on in trying to regather possession with the try-line beckoning.

It took a marvellous defensive read from Ulster fullback Addison and his thumping tackle on Clermont secondrow Paul Jedrasiak on 30 minutes to prevent him from releasing Raka for what would have been an unopposed canter to the line. It was the French player’s last involvement.

Ulster conceded two penalties and a free-kick at the scrum in those 40 minutes, the one area of discomfort in a hard-nosed display, particularly up front.

Clermont’s desperation to change the tone of the contest was illustrated in springing five replacements at once in the 47th minute. Cooney missed a couple of penalties to touch – there were one of two errant decisions that allowed the visitors respite they didn’t deserve – but the scrumhalf atoned magnificently with a brilliant individual try.

He nipped around the short-side from a lineout maul, chipped the ball over Raka, controlled the ball beautifully with his foot and dived on it to dot down.

Ulster’s indiscipline and scrum issues eventually got them into trouble on 72 minutes, Doyle awarding a penalty try as three times in succession the Ulster eight transgressed as they backpedalled five metres from their line. At 18-13 the outcome was once again up for dispute but despite two further penalty concessions they hung on for a thoroughly merited victory.