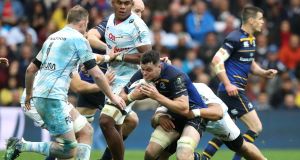 According to the official statistics James Ryan did not miss a single tackle in the five European Champion Cup matches in which he started and the four when introduced as a replacement. Photograph: David Rogers/Getty Images

Devin Toner is occasionally hidden-in-plain-sight on a rugby pitch, eclipsed by more eye-catching contributions from his team-mates but they are the very people who would never overlook or underestimate the input and impact of the six foot, eleven inch secondrow.

Toner, who along with Cian Healy, Isa Nacewa and Johnny Sexton equalled the record of four European Cup wins previously jointly held by former France internationals Cédric Heymans and Fréderic Michalak, played more minutes (673) than any other Leinster player in this season’s tournament and was only one of two players – tighthead prop Tadhg Furlong was the other – who started in all nine matches.

It’s an achievement that represents remarkable physical endurance given the nature of the matches and calibre of the opposition especially for a player with a voracious workload on both sides of the ball. Only two players Jack Conan (86) and Robbie Henshaw (83) made more tackles than Toner’s final tally (79).

The secondrow played all bar 47 of the maximum 720 minutes from the nine matches while other numbers that define his input is that he claimed Leinster’s most lineout steals and lineouts won (36), the third-highest in the competition behind Munster’s Peter O’Mahony (42) and Racing 92 and 2018 European player-of-the-year Leone Nakawara (38).

Toner oversaw a 100 per cent success rate out of touch in the quarter-final and semi-final wins over Saracens and the Scarlets respectively and although Leinster coughed up three in the final against Racing 92, they also managed to pilfer a couple, Toner’s secondrow cohort James Ryan prominent in that respect.

As an aside, according to the official statistics Ryan (74) did not miss a single tackle in the five matches in which he started and the four when introduced as a replacement, a statistic to tuck away alongside his unbeaten run of 21 matches with Ireland and Leinster as a senior professional.

While Toner started on the bench for the first (France) and last (England) matches in Ireland’s Grand Slam run through this season’s Six Nations Championship he remains at the epicentre of this Leinster team.

The timeframe regarding Robbie Henshaw’s recovery from shoulder surgery sustained in scoring a second try in a Six Nations Championship match against Italy in February to his return for Leinster’s semi-final win over the Scarlets was little short of astonishing as was his performance in that match.

The only game that he missed was the win over Saracens at the Aviva stadium and in those eight matches he completed all bar 26 minutes, which considering the nature of his duties is an impressive physical feat.

Earlier this season Jack Conan was very honest in assessing the areas of his game that needed to be improved a little and one of those he highlighted was his work-rate in defence. He honoured this commitment leading the team in tackles (86) despite starting only six matches and none more important than the one he made on Racing 92 winger Teddy Thomas in the final.

It was a pivotal moment as the ensuing lineout was provided the preamble to Isa Nacewa’s game winning penalty.

James Lowe might have played only three matches but he was just 12 minutes short of the maximum allotted time (228) while his numbers in attack of two tries, 13 defenders beaten and six clean breaks graphically illustrate his prowess in this facet of the game.

Only Garry Ringrose, of the 37 Leinster players that saw game time during the tournament , played every single minute (400) in starting and finishing all five matches.

The final word is reserved for Leinster’s captain, Nacewa, who retires at the end of the season, the man who kicked two penalties include the match-winning effort in Bilbao, who tied for the most defenders beaten (14), alongside Luke McGrath, who made more clean breaks (10) than any of his team-mates and who set standards on and off the pitch at a club whom he helped to propel to four European triumphs.

1 Reality Bites – Tales from the new normal: Caitríona Cormican
2 Nicholas Quinn: ‘Swimming became how I dealt with grief’
3 James McClean still failing to learn his own online history lesson
4 Ian McKinley: ‘You do take for granted the simple things in life’
5 A beautiful, happy accident - Moneyball is the best sports movie ever
Real news has value SUBSCRIBE