Caelan Doris to captain Ireland at under-20 World Championship

Ronan Kelleher, Angus Curtis and Eoghan Clarke all miss out on the squad through injury 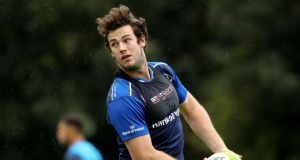 Caelan Doris will captain Ireland in the under-20 World Championship in France. Photo: Inpho

Caelan Doris will captain Ireland in the under-20 World Championship in France next month, taking over the role from Tommy O’Brien. The 20-year-old Ballina native and former Blackrock schoolboy has recovered from a hamstring injury that saw him miss the entire Under-20 Six Nations Championship.

Doris recently made his debut for Leinster when coming off the bench for a 19-minute cameo in their Pro14 defeat to Connacht at the Sportsground and was one of four players who were promoted from academy to senior contracts for next season.

The number eight played for the Irish 20s last season as an 18-year-old and was outstanding in several matches. He played in last season’s World Championship and his presence is a significant fillip for Ireland Under-20 coach Noel McNamara, especially in the light of injuries to Ronan Kelleher, Angus Curtis and Eoghan Clarke to highlight three players.

Trinity hooker Dan Sheehan has been promoted to the squad as a result of a series of excellent performances for the college’s Under-20 and senior team this season.

McNamara’s side are in a pool with Six Nations champions and hosts France, South Africa and Georgia and will be looking to build on earlier performances in the season when they beat Italy and Scotland at home, lost by three points in Donnybrook to Wales, 34-24 to France away and were competitive for 60-minutes against England until injuries took a huge toll.

Ireland’s Under-20 matches will be shown on eir Sport.

*Denotes uncapped at this level

Buckley and Sligo ready to throw down gauntlet to the champions