Encouraging display, albeit in defeat, to Leinster shows van Graan’s side not far away 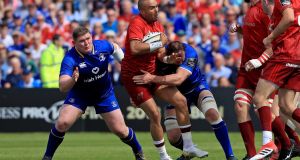 At face value, Munster’s season looks like a case of the same ol’ same old. Where last season it was a semi-final defeat followed by one in a final, this season another European semi-final defeat was the precursor to yet another anti-climactic loss at the same stage in the Guinness Pro14.

And so the run of knock-out defeats and losses in the capital continued. To many supporters, an end to the drought since Munster’s last trophy in 2011 must look as far away as ever.

Even through the prism of their results of the course of this season compared to last, Munster could be said to have taken a small step backwards. In last season’s Pro12, they won 19 and lost just three of 22 matches before beating the Ospreys in the semi-finals and then losing to the Scarlets in the final.

In this season’s Pro14, they won 13, drew one and lost seven in 21 games, before beating Edinburgh in the quarter-finals and then losing to Leinster last Saturday.

But this was all to the backdrop of Rassie Erasmus’ impending departure halfway through the season and the changeover to Johann van Graan. The latter, along with Felix Jones, Jerry Flannery and a largely intact playing squad should only benefit from this season’s experiences, and there were signs aplenty that their attacking game has evolved, with van Graan giving Jones more of an input.

Last season it seemed like there was much more of a glass ceiling above Munster in the wake of those crushing defeats to Saracens (10-26) in the European semi-final at the Aviva and the Pro12 final against the Scarlets (22-46) at the Aviva.

Granted, Munster’s suffering in the opening 25 minutes against Racing 92 in Bordeaux brought those defeats to mind, and the debate will rage as to the validity or otherwise of their second-half comeback given the game was effectively up.

True, Toulon threatened to do something similar in the opening quarter of the quarter-final in Thomond Park, and to a slight degree Munster rode their luck that day given the manner Simon Zebo prevented Chris Ashton from scoring an early try, even if try-saving tackles by Andrew Conway, Alex Wootton and Sam Arnold were of their own making. Yet there was something wrong with them in that opening 25 minutes in Bordeaux.

Whether it was the travel in coming back from the high veldt in South Africa or the heat in Bordeaux, or a combination of both, Munster weren’t themselves.

Remember, this was a Racing team they had beaten in three of four previous meetings over the last two seasons, and they had chances to win when Racing beat them 34-30 at the U Arena in January. That opening 25 minutes of the semi-final was out of kilter with the previous four meetings.

When James Lowe was haring toward the corner flag in the RDS last Saturday, having previously set up Jack Conan’s opening try, until being hauled down by Arnold, the script was threatening to rewrite itself. For much of that opening quarter, it looked as if Munster might be embarrassed.

But they regrouped, drew energy from a potent first scrum in the 31st minute and more than put it up to Leinster. Ultimately, had Munster won, you could have made a case for saying they’d have deserved it.

This being their seventh semi-final defeat (four in Europe) since 2011, along with two final losses in this competition, they probably needed it more and in the end the pity was there had to be a loser.

Their production line, through clubs, schools and academy, has fallen well behind Leinster’s unrivalled conveyor belt, but then so have the others. Against that they have recruited well in Rhys Marshall, Jean Kleyn and Chris Cloete.

Gerbrandt Grobler had become increasingly influential in recent months, and it’s no wonder the Gloucester director of rugby David Humphreys yesterday admitted how excited the club were on confirming the 26-year-old’s arrival. At least that is offset by the impending arrival of Tadhg Beirne.

For sure, Simon Zebo’s X-factor will be sorely missed, not least amongst their supporters. Between them Mike Haley, the 23-year-old Irish qualified fullback who is joining from Sale Sharks, Andrew Conway and Stephen Fitzgerald have some void to fill.

However, had Leinster pulled away again last Saturday, it would have been an altogether more damaging denouement to Munster’s season. Instead, Munster can extract plenty more from the manner of this defeat than from either of those against Saracens and the Scarlets which ended their trophy ambitions last season.

Munster turned up and how, ensuring a belter of a semi-final. The closeness of the final score line may only have made the defeat hurt more in its immediate aftermath, but they showed they can play too. For them, that was hugely important. They’ve work to do, but they are getting closer.