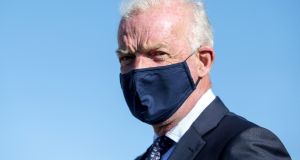 Willie Mullins will have Stratum and True Self in next week’s Melbourne Cup. Photograph: Laszlo Geczo/Inpho

Willie Mullins has admitted to being “pleasantly surprised” at how racing has coped with the impact of the coronavirus pandemic.

Ireland’s champion National Hunt trainer doesn’t expect a change to the sport continuing behind closed doors anytime soon but said the Covid-19 emergency hasn’t had an impact on the number of horses in his Co Carlow string.

Two of them, Stratum and True Self, are in Australia being readied for next week’s A$8 million (€5m) Melbourne Cup.

If Melbourne is set to emerge from a 112 day lockdown then Level 5 restrictions continue to apply closer to home. Despite that racing continues behind closed doors with the jumps game set to step up a gear this week.

Mullins’s great rival Gordon Elliott plans to unveil some of his star names at Down Royal’s two-day festival including the hugely exciting Envoi Allen, who will make his debut over fences in a Beginners Chase on Friday.

On the same day Elliott can also call on the Champion Hurdle hopeful Abacadabras who is one of seven entries left in the Grade 2 WKD Hurdle after Monday’s forfeit stage.

Mullins has notably made no entry for Friday’s Down Royal action and won’t be represented either in the following day’s Grade 1 Ladbrokes Champion Chase.

He said on Monday that plans for the return to action for most of the stars of his massively powerful team won’t be made for another few weeks.

One exception is that his dual-Cheltenham Gold Cup hero Al Boum Photo won’t be seen out until Tramore on New Year’s Day.

The Savills Chase has been Al Boum Photo’s ‘Blue Riband’ warm-up for the last two years. The lightly raced eight-year-old has run just five times in the last 30 months.

Fears of a devastating impact on the numbers of horses in training due to coronavirus haven’t come to pass according to Mullins.

“I’ve been pleasantly surprised at how strong the game is, and the enthusiasm of owners,” he said. “I haven’t had any people backing out because of Covid.”

He added: “It is a resilient game. People will come to realise it’s not going to change much before next spring. Hopefully there might be a change for Leopardstown at Christmas. But it is going to be the way it is for the time being.”

Mullins pointed to this week’s Tattersalls Horses In Training Sales in Newmarket, which started on Monday, as a “fair barometer” for future ownership prospects.

Billed as the world’s largest sale of horses in training, more than 1,000 animals will go through the ring over four days, including cast-offs from top flat operations such as 48 horses catalogued from Aidan O’Brien’s Ballydoyle team.

“If they’re going as people say they’re going there will be a lots of bargains to be bought: if not they’ll be just as dear as they always have. It will be a fair barometer I think.

“I know when I go to buy horses it is still tough enough. There is plenty of interest in National Hunt stock anyway,” Mullins said.

He could be doubly represented in next week’s Melbourne Cup should True Self secure a place in the final 24-strong field alongside her stable companion Stratum.

The latter, winner of last year’s Cesarewitch, will be known as Stratum Albion in Australia to avoid a name-clash and is starting to impress in his build up for ‘the race that stops a nation.’

Mullins’s assistant, David Casey, has been riding the horse in his work at the Werribee racecourse.

“He really likes good ground and he doesn’t get it that often at home. I’ve been riding him a couple of bits of work and his work was very good. In his work the other morning he showed a bit of pace I didn’t think he had. We’re getting him right where we want him,” Casey told local media.

Max Dynamite was second and third for Mullins in the Melbourne Cup in 2015 and 2017 respectively.

He hopes to also be able to call on True Self in the famous race which is also set to see Aidan O’Brien try to win it for the first time through Anthony Van Dyck and the ante-post favourite Tiger Moth.

Joseph O’Brien, successful with Rekindling in 2017, relies on Master Of Reality and Twilight Payment this time. He could also call on Pondus if that horse impresses in Wendesday’s Bendigo Cup and climbs the rankings into the top 24 places for the Melbourne Cup.

True Self is currently at number 24 and Mullins said: “She was first reserve last year and the same thing could happen again. One or two could jump ahead of her if they win over the weekend. But I’m hoping both of them can run.”