Johnny Murtagh to train for the Aga Khan in Ireland 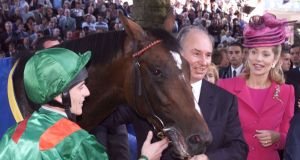 One of Irish racing’s most successful alliances has been rekindled as Johnny Murtagh has been added to the Aga Khan’s list of trainers in Ireland.

The former five-times champion jockey enjoyed some of his greatest days in the saddle for the Aga Khan including landing the Derby – Irish Derby – Arc hat-trick in 2000 on Sinndar.

On the back of a successful season from his Curragh base, including Group 1 success for Champers Elysees in the Matron Stakes, Murtagh can look forward to joining Dermot Weld and Michael Halford by training for the renowned owner-breeder in 2021.

The pair had a high-profile split in 2012 when Murtagh was riding for John Oxx, then the Aga’s principal trainer in Ireland.

At the time Tommy Carmody was officially training from Murtagh’s yard and saddled Ursa Major to beat the Aga Khan’s Hartani in a Group 3 race at the Curragh.

Murtagh was out of action with an injury but could be seen welcoming back Ursa Major to the winners enclosure.

Shortly afterwards it was confirmed that Murtagh wouldn’t ride for the owner due to “differences between the two parties.”

The Irishman later described it as a “horrible moment in my career” and admitted he was “probably naive.”

During his stellar riding career Murtagh also rode top-class winners such as Alamshar and Timarida for the Aga Kha and said on Tuesday: “I am delighted to renew our partnership with the Aga Khan and his team.

“I look forward to receiving his draft of yearlings here at Fox Covert Stables and hopefully many winners to come, to add to our great association together.”

The owner’s representative in Ireland, Pat Downes, said: “We have watched Johnny’s training career develop over the last few years, and undoubtedly 2020 has been a highly successful year for him.

“We are delighted to have the opportunity to have him train for the Aga Khan Studs, and we will be sending him some yearlings in the coming weeks.

“His Highness and Johnny have enjoyed some great days in the past together, and hopefully there will be good days to look forward to in the future as well.”