Princess Zoe out to cap fairytale summer in Prix Royal-Oak 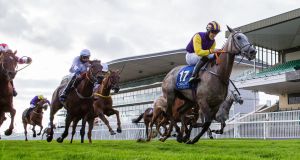 Some of the greatest stayers in history are on the Prix Royal-Oak’s roll of honour and Princess Zoe is favourite to join them when she lines up in Paris on Sunday.

Three weeks after her hugely popular Prix Du Cadran victory, Tony Mullins’s mare is back at Longchamp for another Group One prize.

Princess Zoe faces seven opponents in the historic €210,000 race that has been won in the past by Irish stars such as Yeats and Vinnie Roe. It is due off at 2.50 Irish time.

The grey mare is a 4-5 favourite in some lists to join them and put a seal on a season that has seen her rise from a 64-rated handicapper to top-class talent.

“You’d imagine she’s topping out at this stage but I think she has improved again from the Cadran,” Mullins said. “We’re obviously worried about the 21-22 day turnabout, to travel twice to France. But all indications here are she’s perfect.”

The whip suspension Joey Sheridan received after the Cadran means Séamus Heffernan rides the German import for the first time.

Mullins has nominated the Aga Khan’s three-year-old filly Valia, a Group Two winning daughter of Sea The Stars, as one he is wary of, although the 2018 winner Holdthasigreen takes his chance again too.

The Princess Zoe story has caught the public imagination this autumn ensuring she is the focal point of an extensive Group One weekend programme.

Nevertheless Aidan and Joseph O’Brien’s big-race ambitions run from Melbourne to Doncaster and Saint-Cloud on Saturday.

Both are represented in Britain’s final Group One of the season, Doncaster’s Vertem Futurity, while O’Brien Snr also has runners in the two top-flight juvenile prizes up for grabs at Saint-Cloud.

By then father and son will know their fate in Australia’s greatest all-aged prize, the $5 million Cox Plate, which will be run at the Moonee Valley track at 6.15 Irish time on Saturday morning.

Armory, third to Magical in the Irish Champion Stakes last month, has a chance to emulate an ex-Ballydoyle star, Adelaide, who won the Plate in2014.

His stable-mate Magic Wand was ruled out after failing to recover from a stone-bruise in time but her defection allows in Joseph O’Brien’s Buckhurst who had been controversially made first-reserve.

Runner-up in both the National and Dewhurst Stakes, Wembley will try to make it third time lucky at the top level in a race which has thrown up the last three winners of the 2,000 Guineas.

Ryan Moore, whose position as first jockey at Ballydoyle has been the subject of speculation, with one firm making Colin Keane odds-on to take the post in 2021, is on board Wembley.

Tom Marquand partnered Galileo Chrome to Leger glory for Joseph O’Brien last month and is on that one’s stable companion State Of Rest.

The services of French champion jockey Pierre-Charles Boudot have been snapped up for both Van Gogh in the International over a mile, and last week’s impressive maiden winner Bolshoi Ballet in the 10-furlong event.

His opposition includes Tiger Tanaka, winner of the Boussac earlier this month when Jessica Marcialis became the first woman to ride a Group One winner on the flat in France.

The Group Three Eyrefield Stakes is Saturday’s Leopardstown feature where the 101-rated Reve de Vol sets the standard on figures.

There was enough promise though in Carlisle Bay’s winning debut at Tipperary to suggest he could exceed that.

Jockey Wayne Lordan returns to action on Saturday after fracturing a scapula at the Listowel festival. His two rides include Mythical in the Trigo Stakes.

In other news the British Horseracing Authority has amended the result of the Bet 365 Fillies’ Mile won at Newmarket by Pretty Gorgeous.

Controversy arose afterwards when it emerged that Aidan O’Brien’s team at the track had mixed up the saddles for their two runners, Snowfall and Mother Earth.

The 50-1 outsider Snowfall was originally given as third but an eagle-eyed observer on social media spotted the filly third past the post was really Mother Earth.

On Friday the BHA used its powers to amend the result with Mother Earth now third and Snowfall in eighth.

However, it also said it will reassess the rules to determine whether there should be additional grounds for disqualification in future.

In this case it couldn’t disqualify “because the grounds for potential disqualification are set out in the rules of racing, are specific and do not include horses starting from the wrong starting stalls or carrying the wrong jockey.”