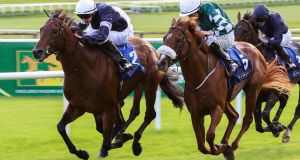 Joseph O’Brien still isn’t ruling out a tilt at Saturday’s Cox Plate for Buckhurst despite his disappointment at the four-year-old being made first-reserve for Australia’s most coveted all-aged race.

With 15 horses chasing a place among the final field of 14 for the big race’s 100th renewal, it was Buckhurst who failed to make the cut made by the Moonee Valley Racing Club Committee.

If O’Brien admitted to surprise on Tuesday then Buckhurst’s owners, Lloyd and Nick Williams, were livid at their horse being made the ‘emergency’ horse or ‘reserve’ as it would be called here.

“I am in shock but it’s their race and they can do with it what they like. I do find it extraordinary to be honest. I think there is a couple of horses that should be well behind Buckhurst. We didn’t even consider we would miss the field,” Nick Williams said to local media in Australia.

“He has raced against Sir Dragonet three times, twice giving him weight and beating him twice. The only time Sir Dragonet beat him we got a crook ride. There is a range of horses ahead of Buckhurst in this field and I find it extraordinary,” he added.

Aidan O’Brien, who won the Cox Plate with Adelaide in 2015, has his two contenders, Armory and Magic Wand safely in the lineup for the $5 million feature and his son isn’t ruling out hope a third Irish runner will ultimately lineup.

“If there is a non-runner and he gets in we would like to run. There is great prizemoney, we think the track will suit him, he ran a nice race in the Caulfield Cup (seventh last Saturday) and we think 10 furlongs is a better trip for him.

“It was a surprise obviously that he was the one pushed out of the race. We had expected to have a place in the race. But it is what it is. He has the option of the Melbourne Cup or the MacKinnon Stakes the week after that. I’m not sure yet and I’ll chat to Lloyd and Nick,” Joseph O’Brien said.

The trainer famously landed the 2017 Melbourne Cup for the Williams team with Rekindling and Buckhurst is one of four horses he has sent to the year’s Spring Carnival.

They include Master Of Reality and Twilight Payment who are back for another crack at the ‘race that stops a nation’ on the first Tuesday of next month.

Buckhurst’s failure to secure a sport in the Cox Plate was widely contrasted with the former Ballydoyle horse Sir Dragonet who is now in the care of local trainers Ciaron Maher and David Eustace.

However a MVRC spokesman argued: “The one (race) that was front of mind with the committee was when they met at Group 1 level in July.

He confirmed on Tuesday that both are finished for the year but their stable companion State Of Rest will line up in this Saturday’s Vertem Futurity at Doncaster.

“The plan is to run. He ran very well in the Champagne at Doncaster and this has been the plan since then. I’m not sure about the ground. We wouldn’t like it too heavy,” said O’Brien who won the Futurity twice for his father as a jockey.

State Of Rest, third to Chindit in the Champagne despite losing a shoe, is a 6-1 shot in some lists for Saturday.

Aidan O’Brien has seven entries left in the Futurity but could end up juggling his powerful juvenile team with two other Group 1 races taking place at Saint-Cloud on Saturday.

Four of his Doncaster entries, including the Dewhurst and National Stakes runner up, Wembley, are among 14 entries currently in the €150,000 Criterium International. Ken Condon has also left his Railway Stakes winner Laws Of Indices in the mile contest.

O’Brien has half a dozen entries in the 10 furlong Criterium de Saint-Cloud. They include the quartet of Brazil, Bolshoi Ballet, Sir Lucan and Carlisle Bay who also have the option of staying at home for the Eyrefield Stakes at Leopardstown on Saturday.

The Irish trainer has previously won each of the French races on four occasions.