‘He hasn’t put in a transfer request to me yet, that’s all I know’ 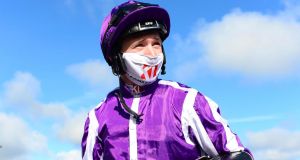 Jockey Colin Keane has been linked with the No 1 jockey role with Aidan O’Brien. Photograph: PA Wire

Trainer Ger Lyons has dismissed speculation linking his jockey Colin Keane to the job as Aidan O’Brien’s No 1 rider next year.

Keane’s pursuit of the jockeys’ championship has been helped in recent weeks by a growing link with O’Brien.

He rode his first winner for European racing’s most powerful trainer on Khartoum at the Curragh 12 days ago.

Since then he has had 10 more rides in Ireland and Britain for the Ballydoyle team. Two of them have won, including Cartouche at Fairyhouse on Tuesday.

It has helped fuel rumours that Ryan Moore’s position as retained jockey to Ballydoyle/Coolmore may be coming under pressure.

Earlier this week Paddy Power made Keane a 1-6 favourite to hold the most coveted job in racing in 2021.

Keane is currently leading his rival Shane Foley in a fight for the jockeys’ championship which he first won in 2017.

That completed a stunning rise to the top for the 26-year-old who Lyons appointed as stable jockey in 2014 when Keane was still an apprentice.

Their alliance has become one of the most renowned in Irish racing. Both secured their first Classic victories this year with Siskin in the Irish 2,000 Guineas and the Coolmore owned Even So in the Irish Oaks.

Asked about the speculation, Lyons said on Friday: “It’s news to me. Nobody has spoken to me about it. And nothing will happen without me and my owners being involved in the conversation, simple as that.”

The Co Meath-based trainer admitted that his jockey’s run of success in recent years makes it inevitable that his services will be in demand.

However he stressed: “As they say in the football world it is bad manners to talk about somebody else’s players. He hasn’t put in a transfer request to me yet, that’s all I know!”

He added: “We are bang there in the top four [stables] consistently. We are not going to give him 20 Group Ones a year but he will not be taking any job without having a discussion with me first and my owners. As far as I’m concerned he is my jockey. “

Moore has been No 1 at Ballydoyle for six seasons including 2017 when O’Brien set a world-record 28 Group One winners in a calendar year.

Moore teams up with Wembley for O’Brien in Saturday’s Vertem Futurity at Doncaster.

The Englishman endured the frustration of being beaten on the same colt in the Dewhurst Stakes two weeks ago by his stable companion St Mark’s Basilica, ridden by Frankie Dettori.

The coronavirus pandemic has meant Moore has been unable to travel regularly to Ireland this year.

He did ride over Irish Champions Weekend last month but was out of the frame in the Irish Champion Stakes on Japan as Séamus Heffernan won on the star O’Brien mare Magical at Leopardstown.