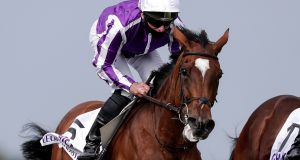 Magical put up a superb performance at Leopardstown to beat Ghaiyyath and having no less than the subsequent Arc winner Sottsass only fourth behind her. Photograph: Laszlo Geczo/Inpho

Aidan O’Brien’s global Group One reach extends from Australia to Ascot on Saturday culminating in a potential Magical moment in the Qipco Champion Stakes.

Magical is likely to start favourite to win the highlight of the 10th “British Champions Day” for a second year in a row.

If she manages it the Ballydoyle mare will eclipse no less than Frankel, and his son Cracksman, by winning three times at the lucrative fixture that officially ends the British flat season.

She’s joined in the race by her stable companions Japan and the Derby winner Serpentine which reflects the focus O’Brien is putting on the programme a fortnight after being forced to scratch his Arc runners due to contaminated feed.

A subsequent “mistaken identity” controversy for Newmarket’s Fillies Mile will surely have O’Brien keeping everything crossed that this weekend is both successful and straightforward.

It begins in Melbourne at 7.15am on Saturday morning when last year’s Derby hero Anthony Van Dyck tries to defy topweight in the $5 million Caulfield Cup.

The Irish star is the first ‘Blue Riband’ winner to race in Australia and as well as topweight will have to overcome a wide draw around the tight Caulfield circuit.

He is joined in the mile and a half handicap by both Willie Mullins’s True Self, ridden by Wexford-born Declan Bates, and the Joseph O’Brien-trained Buckhurst.

O’Brien runs nine other top-flight contenders in the afternoon, part of a 19-strong Irish representation in all at Ascot.

They include Dermot Weld’s dual-Irish Leger winner Search For A Song, who takes on Stradivarius in the Group Two Long Distance Cup, as well as Ger Lyons’s Curragh Oaks heroine Even So in the Fillies & Mares.

Colin Keane maintains his partnership with her and continues a burgeoning link with Ballydoyle by taking three more rides for O’Brien at Ascot including Japan in the big race.

Ryan Moore was on that colt in last month’s Irish Champion Stakes but is back on O’Brien’s clear number one hope this time.

Magical put up a superb performance at Leopardstown to beat Ghaiyyath and having no less than the subsequent Arc winner Sottsass only fourth behind her.

The contaminated feed issue made academic any speculation about what Magical might have done in the Arc had she lined up.

However with old rival Enable retired, and her stable companion Love finished for the season, she is widely expected to successfully continue an autumn campaign that could also take her to next month’s Breeders Cup.

Both O’Brien and John Gosden have a record-equalling fifth QEII victory in their sights with the Irishman’s three-pronged challenge led by the course and distance winner Circus Maximus.

His English rival however looks to hold the ace with the unbeaten Palace Pier, winner of the St James’s Palace and the Prix Jacques Le Marois on very soft ground.

A busy domestic programme is topped by the €120,000 Foran Auction Race Final at Naas on Sunday. A field of 16 will line up for the seven furlong event restricted to horses that cost less than €72,000 at the sales.

They include four from Joseph O’Brien’s team topped by the Beresford Stakes third Snapraeterea although his stable companion Vafortino is a major contender too.

The colt whose only other start was on the first day of the season in March wasn’t beaten far in the Dewhurst having met with a little interference.

As a son of the Oaks winner Was, Knight Of Malta looks interesting in a mile and a half handicap having been running over much shorter.