Contaminated feed episode traced to a batch of molasses 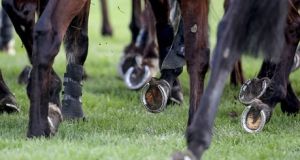 11 horses trained by Aidan, Joseph and Donnacha O’Brien were forced out of last weekend’s Arc card after traces of the prohibited substance Zilpaterol were found in their systems by a French laboratory the night before they were due to race. Photograph: Getty Images

The root of the contaminated feed issue that has rocked racing for over a week appears to have been traced to a batch of molasses.

The Gain equine nutrition firm said on Sunday that it has switched its supplier of molasses - the juice obtained from raw sugar during the refining process - and has resumed manufacture of feed.

In a statement Gain outlined on Saturday night how an international supplier of molasses, ED and F, issued an “urgent action and recall notice” outlining products suspected of containing minute traces of Zilpaterol.

That is the drug used to fatten cattle in the US but which is banned in Europe and is a prohibited substance in racing.

Traces of Zilpaterol were detected in samples from racehorses in France prior to the Prix de l’Arc de Triomphe meeting last week and linked to a contaminated batch of feed from Gain.

Many trainers in Ireland and Britain were advised to switch from Gain products including the Irish champion trainer Aidan O’Brien and his sons, Joseph and Donnacha.

Although tests for Zilpaterol in Ireland and Britain showed up negative for the 11 horses the trio planned to send to last Sunday’s Arc programme, the samples were positive in a French lab.

It forced the withdrawal of all 11 horses in what O’Brien Snr said was an effort to ensure the integrity of racing.

The discrepancy between the results in France and at the LGC lab in Newmarket used by Irish and Britain’s racing’s regulatory bodies has also prompted concern.

Gain, which is part of the Glanbia group, has said it switched molasses supplier last Monday and has resumed production of its equine feed. It said it has done that following consultation with the Department of Agriculture, Food and the Marine.

Gain also said deliveries on the feed products resumed last Wednesday and that they are working to replenish stocks as soon as possible. It apologised to customers for inconvenience caused.

A spokesman for the Irish Horseracing Regulatory Board said it is continuing investigations into the matter in conjunction with the department, the British Horseracing Authority and France Galop.

He also said that the IHRB has noted the Gain press release and that it would continue to scrutinise the matter in relation to any risk to the racing population.

However he added that he felt that any such risk was low.

1 Seán O’Brien: Anger over my parents’ break-up never left me
2 Limerick’s warning loud and clear despite the eerie silence in Thurles
3 Plenty of positives for Farrell as Ireland hit the ground running
4 Will Connors chops his way to the front of Ireland’s openside queue
5 Madness or defiance? The GAA is taking a huge gamble in staging Championships
Real news has value SUBSCRIBE