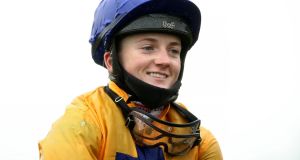 Hollie Doyle: passed her own record of 116 winners for a year with two and a half months of 2020 still to go. Photograph: Tim Goode/Getty Images

Hollie Doyle set another milestone in what has been a stellar season as she broke her own British record for the most winners in a calendar year by a female jockey at Kempton.

Doyle, 24, rode State Occasion in the Unibet 3 Uniboosts A Day Nursery Handicap and she had to be at her strongest aboard Ralph Beckett’s runner, hanging on by a short head in a photo finish with Tornadic.

She ended last season with 116 winners – breaking Josephine Gordon’s record of 106 – but this was her 117th, with two and a half months of the year still to go.

Having already raced to 100 winners in early September – two months quicker than last year – Doyle has also ridden her first Group winner, on Ed Vaughan’s Dame Malliot in the Princess of Wales’s Stakes at Newmarket, as well as recording her first Royal Ascot success aboard the Alan King-trained Scarlet Dragon in the Duke of Edinburgh Stakes.

She was also appointed as retained rider to leading owner Imad Al Sagar back in July and competed in a Group One for the first time when third aboard Dame Malliot in Germany.

Doyle became the first female jockey to ride five winners in one day at Windsor in August – and went close to a Group One success when runner-up on Glen Shiel in the Betfair Sprint Cup at Haydock.

Doyle told Great British Racing: “When I broke the record last year, in the back of my mind I was always thinking about breaking it again this year, as I didn’t want it to be a one-off, so I’m delighted to have achieved that goal.

“When you think that we also missed two months of racing this year (through the Covid-19 shutdown), it is amazing that I have been able to do it so quickly. I want to thank all the owners and trainers that have supported me throughout this year – without them, none of this would have been possible.”

A large proportion of Doyle’s wins have come for Berkshire-based trainer Archie Watson, who added: “Hollie is an incredibly hard-working and talented jockey. We have had over 100 winners together in a short amount of time and I am delighted that she is starting to gain the recognition she deserves.”