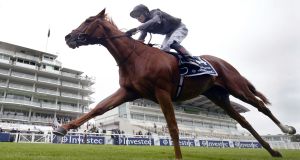 Last year’s winner Magical could be joined by stable companions Japan and Serpentine as Aidan O’Brien considers a three-pronged assault on the Qipco Champion Stakes at Ascot.

The Ballydoyle trainer has saddled eight previous winners on Qipco British Champions Day, and looks set to send another formidable squad across the Irish Sea this weekend, for what will be the 10th anniversary of the showpiece meeting.

While Magical has long been pencilled in for a return to Ascot, several big names who might not have been bound for Berkshire are now in the mix due to the well-documented problem surrounding contaminated feed which prompted O’Brien to withdraw all his runners on Arc day in Paris.

O’Brien admits a late change of big-race target is not ideal, but ParisLongchamp’s loss looks set to be Ascot’s gain.

“We had to think hard about what we did with the horses that were due to go to France as for a long time their preparation had been geared around Arc weekend, and when you carry on for another two weeks it’s not always ideal,” said O’Brien.

“It can be tricky to keep the momentum going. We were looking forward to Arc weekend and the horses were training really well for it for a long time, but that’s the way it was and the way it was meant to be and we just accepted it and moved on.

“Next year will be another year. We changed the route with them and we’ll see what will happen, but they seem to be in good form.”

Japan and Epsom Derby winner Serpentine were both considered leading contenders for the Prix de l’Arc de Triomphe itself, but are now possibles to line up alongside Magical, with alternative options running out.

However, O’Brien’s other Champion Stakes entrant, Mogul, is set to miss out.

O’Brien said: “Japan is a strong possible and this has been the target for Magical since Leopardstown. Mogul is not a definite because he could go straight to the Breeders’ Cup Turf.

“The lads have to decide what they want to do with Serpentine. We were really looking forward to the Arc with him and his prep for that was very good – we felt he had moved up plenty from his prep run and done very well physically.

“He has to run somewhere shortly, either that or we have to back off him altogether. The options for him after Saturday are the Breeders’ Cup, the Japan Cup and the races in Hong Kong.

“We’re very happy with him at home at the moment and if he runs on Saturday it will be interesting.”

The main supporting race is the Queen Elizabeth II Stakes, in which O’Brien’s chief contender will be the admirable Circus Maximus.

The tough-as-teak six-year-old has significant ground to make up on John Gosden’s hot favourite Palace Pier on their meeting at Deauville this summer, but O’Brien hopes a return to Ascot – where he has won twice before – will help Circus Maximus close the gap.

“He’s a very competitive horse who loves it when horses challenge him – he’s tough and hardened and loves to get into a battle.”