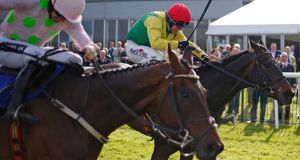 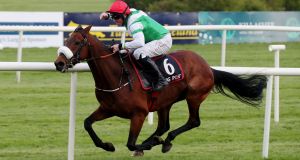 The season has been dominated by the sweep of Gordon Elliott’s attempt to dethrone Willie Mullins as champion trainer but on Wednesday no big picture considerations could impinge on the visceral thrill of Sizing John’s epic Coral Punchestown Gold Cup success.

Maybe the short head with which Jessica Harrington’s star defeated Mullins’s Djakadam will prove vital when the trainers’ championship is totted up on Saturday. But this was a race to savour all on its own.

Jockey Robbie Power reported that Sizing John wasn’t as good as when he won the Irish Gold Cup in February, or in last month’s ‘Blue Riband’ at Cheltenham. However by completing a unique Gold Cup hat-trick, the horse exhibited that other vital element to a champion – courage.

What made this race so memorable was that there was no hiding. The English hope Coneygree set the sort of pace that allows no room to disguise any lack of fortitude.

For a horse making his return from injury, Coneygree put in a remarkable performance and might have done better than third but for a bad mistake at the second last. It was that mistake however which produced a duel for the ages.

Djakadam and Sizing John were almost in unison from the last and it was only in the final strides that the 9-10 favourite got his nose decisively in front.

“Full credit to the horse, he has the heart of a lion,” said Power. “He’s had plenty of racing since Christmas so all credit to Jessie that he’s won three Gold Cups. I don’t think it will be done again.”

Harrington had earlier won a handicap hurdle with Magic Of Light and was delighted to see the magic of a remarkable run of Spring success continue at her local track.

“The whole way I thought he wouldn’t win. But pure class and guts got him there. It’s very hard to win the Gold Cup and come here. He also pulled off a front shoe so he’d plenty of excuses,” she said, adding of the unique hat-trick – “It’s the first time I’ve even entered in all three races, So beginners luck!”

Considering Elliott sandwiched the feature with two Grade One victories, and ended the day almost €277,00 ahead in the trainer’s table, Mullins was magnanimous about Djakadam’s defeat.

“It was a tremendous race and I don’t think we can complain. Jessie’s horses are in great form and we can’t seem to beat her at the moment,” he said.

“It would have been nice to get this but we didn’t so we keep going.”

Ruby Walsh was given a two-day suspension for his use of the whip on Djakadam and earlier had picked wrong when C’est Jersey beat Battleford in a Mullins 1-2 in a hurdle.

The fluctuating nature of the trainers’ battle means there’s still plenty to play for over the next three days but Elliott’s top-flight victories with Champagne Classic (Mirror Novice Hurdle) and Fayonagh (Racing Post Bumper) could yet prove vital.

Champagne Classic was famously dismissed by Michael O’Leary as the worst horse he owns when winning at Cheltenham. The horse clearly doesn’t hold grudges though and gallantly held off the Mullins pair Penhill and Tin Soldier.

However, excitement over racing’s latest star mare Fayonagh only increased after she became just the third horse to complete the Cheltenham-Punchestown bumper double.

“We’re in a great era of fillies and she’s exceptional,” said her jockey Jamie Codd who stretched his lead over Patrick Mullins in the race to the amateur jockeys’ title by making all on Fayonagh and then beating his rival in the finale aboard Minutestomidnight.