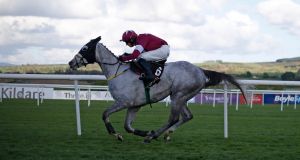 Disko ran out an emphatic winner of the Growise Champion Novice Chase for trainer Noel Meade in the hands of Bryan Cooper at Punchestown on Tuesday.

The Gigginstown House Stud-owned grey was given a positive ride, cutting out the running with Acapella Bourgeois.

Disko (13-8 favourite) kicked on from three out and was in no danger from that point as he quickly pulled clear of the opposition to score by five lengths and record his second Grade One triumph of the season.

Tony Martin’s Anibale Fly was in second place with A Genie In Abottle taking third place for Meade and Gigginstown.

Meade said: “I’ve always loved him and he’s been the apple of my eye for a long time.

“Mags (O’Toole) and Eddie (O’Leary) found him in a small yard in France. He’s never stopped developing since we got him and we’ve always thought he was very good.

“We had one or two setbacks but very little and most things he’d done well. It does appear that good ground suits him really well.

“Even thinking back to Leopardstown his good runs were there and I suppose when he ran in Cheltenham he ran against one of the best horses we’ve seen for quite a while in Yorkhill.

“You’d always hope he’d win like that, but you couldn’t imagine he’d win as easy as that — he won very well. I thought he’d win as he was sparkling last week when we worked him.

“He didn’t come out of Cheltenham that well. We did think about running him in the Ryanair Gold Cup at Fairyhouse but we did a piece of work with him and thought that he needed another bit.

“Road To Respect went to the race at Fairyhouse and it all worked out very well.”

He added: “We’ve had a great season and will be kind of sorry to see the end of it in a way. We’ve got some lovely horses. Gigginstown have been very good to us with the horses they’ve sent to us. It’s easier to train good ones than bad ones.

“I never really doubted he would stay the trip. Probably Our Duke is as strong a stayer as there is and he was coming back on him in Leopardstown that day.

“I wasn’t worried about three miles on that ground. In fact I would say if we made a mistake at Cheltenham it was running him in the wrong race. Anyway we got it right today and I’m thrilled.

“He hasn’t had a real hard season. We picked his races and he didn’t get one on top of the other. He should improve in the summer and we can dream for another while.

“Everybody would love to dream about the Gold Cup, but that’s a dream on it’s own. Isn’t it great to have a horse you can run in a Grade One. He’s won a Grade One by six lengths.

“The other horse (A Genie In Abottle) ran a blinder as well on ground he maybe wouldn’t have liked that much, but I don’t know — maybe he does like it.

“I’ve no doubt that Road To Respect will get three miles as well. I suppose if he was here today and Disko wasn’t he might have won that race as well. We’d expect him to beat A Genie In Abottle.

“They are two lovely horses and hopefully they stay right.”