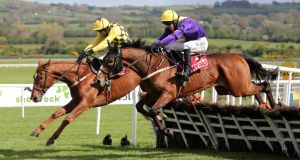 Despite Un De Sceaux giving best to the English raider Fox Norton in Punchestown’s opening feature on Tuesday, Willie Mullins declared himself satisfied with a good day’s work in his bid to overhaul Gordon Elliott for the trainer’s title.

The in-form Robbie Power might have won the Boylesports Champion Chase on the 5/2 Fox Norton but it couldn’t deflect focus from what happened behind him and its implications for the trainers championship.

The 10/11 favourite Un De Sceaux had to settle for second but Mullins still emerged from the race with €57,500 in prizemoney to go with €83,000 from an earlier Herald Champion Novice Hurdle 1-2.

With Elliott winning the final bumper, Mullins narrowed the deficit to his rival to just under €260,000 after starting the day over €400,000 behind. Bookmakers cut Mullins to 5/2 for the title, while Elliott drifted from 1/5 to 2/7.

“I thought it was a very good day. I wasn’t expecting that sort of prizemoney. It’s a pity Un De Sceaux was beaten but Cilaos Emery was a surprise. It’s going to be like that this week – ups and downs,” he said. “The team are in good form but we still have a big mountain to climb.”

Fox Norton continued Power’s Grade One hot-streak ahead of Wednesday’s Gold Cup ride on Sizing John by pouncing past Un De Sceaux after the last.

“He was flat to the boards the whole way but I didn’t want to give Un De Sceaux too much rope. He made one or two mistakes but I knew we’d pick him up,” Power said of the Colin Tizzard-trained winner.

Earlier Mullins’s third-string Cilaos Emery beat the 5/4 favourite Melon in the big novice hurdle but even more than the feature it was what went on in behind that mostly seemed to concentrate post-race minds.

The 5/2 second favourite Labaik once again disgraced himself at the start by refusing to jump off but will still officially line up in Friday’s Betdaq Champion Hurdle without a blot on his copybook.

The enigmatic Cheltenham winner eventually condescended to jump off but had a hopeless task and trailed around to finish last, officially 99-plus lengths behind the second last home.

Labaik has been suspended in the past for serially refusing to start and prior to his Supreme success last month did much the same at Naas when also eventually finishing tailed off.

Suspensions for horses who misbehave at the start are at the discretion of the stewards, with no set rules as to how many times an animal can refuse to race before being suspended.

Inevitably, there was attention on the start where it appeared the field approached the tape before the ‘off’ time and consequently were told by the starter Paddy Graffin to take a turn.

Labaik had looked enthusiastic on the first approach but planted when the field lined up again.

Elliott appeared visibly frustrated and later declined to comment on the start, bar he was disappointed. No action was taken by the stewards in relation to the jockeys riding in the race and no blame was attributed to the starter.

However, the merits in disciplinary terms of counting Labaik’s latest mulish performance as a straightforward run surely look debatable.

His old rival Melon ultimately got engaged in a crucial duel with Pingshou at the front of the race and Mullins said he felt that softened up both of them, allowing Cilaos Emery to spring an 8/1 surprise.

“Davy Russell and Ruby [Walsh] took each other on and killed each other. I can understand why Ruby had to go with him. It wouldn’t have looked too clever if he’d been unable to rein him in. I think there’s plenty of improvement to come from Melon and I’m delighted Cilaos Emery has got his Grade One,” Mullins said.

Far from prizemoney millions, Curragh trainer Sandra Hughes indicated the reality for most trainers when announcing that she is to wind down her operation at the yard famously built up by her late father, Dessie, over the next few months.

“It’s not financially feasible to carry on,” she explained. “It’s a numbers game and if you find yourself down on numbers then you’ve a problem.”

Hughes won the 2015 Irish National with Thunder And Roses but lost him and other Michael O’Leary-owned horses last year.

Hopes of a fairytale Grade One send-off with Acapella Bourgeois were dashed as the horse finished only fifth to O’Leary’s 13/8 favourite Disko in the Growise Novice Chase.