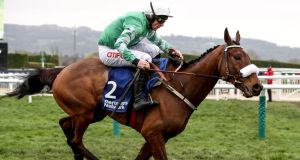 The Albert Bartlett form may not be all it seems, Death Duty running no race and The Worlds End falling two out, so Pertemps winner Presenting Percy could be the Cheltenham horse to back. Noel O’Brien’s decision to raise him to a new mark of 159 seems merited after his last win under similar conditions to today but it is worth saving on Al Boum Photo. He was value for more than the bare four lengths he won by last time, only getting racing room at the last hurdle, and should relish this trip.

Much of the post-Aintree and Fairyhouse talk has been about what a race the 2017 Cheltenham Gold Cup will be with Yorkhill, Might Bite and Our Duke all possible participants, but it would be a mistake forget this year’s winner Sizing John who remains with significant potential at staying trips. He should complete a unique Gold Cup treble in a race likely to be run to suit with Outlander his biggest danger; each year he seems to disappoint at Cheltenham before returning to form at home.

Despite the prize money, this is not particularly competitive and Mr Diablo, well-proven at the track, is overpriced. He travelled nicely in the Topham despite not really taking to the National fences and shaped much better than the distance beaten. His second in a novice handicap over course-and-distance at last year’s meeting is strong form and 139 could underestimate him. Another Aintree runner, Rightdownthemiddle, caught the eye when failing to get home over an extended three miles on the Grand National undercard and now gets a more suitable distance.