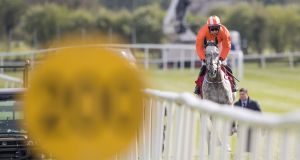 Labaik under jockey Jack Kennedy plays catch up after failing to start during the champion novice hurdle at Punchestown on Tuesday. Photograph: Morgan Treacy/Inpho

The Turf Club is set to examine the rules surrounding whether or not horses are deemed to have raced following Tuesday’s controversial race at the Punchestown Festival when Labaik refused to start in a Grade One event but eventually trailed home the field in last place.

It was the latest example of the talented grey ‘planting’ at the start. Prior to his Cheltenham Festival success Labaik officially completed the course at Naas as well after throwing away his chance at the start. Despite that he was officially recorded as having raced.

Labaik refused to race at Navan in December – and was left at the start – after which he was suspended from racing for 42 days. Gordon Elliott’s enigmatic star is declared to line up in Friday’s Betdaq Champion Hurdle at the festival.

“The situation at the moment is unsatisfactory but it’s not simple,” said the Turf Club’s chief executive, Denis Egan, on Wednesday. “There are two sides. One side is the people who backed the horse and there’s absolutely no doubt they got no run for their money yesterday.

“The other side is the owners of any horse and whether or not that horse is capable of winning prizemoney. If there’s a small field, and a horse jumps off slowly but eventually makes up the ground you can’t deprive the owner the chance to make prizemoney. So we’ve got to try and reconcile both positions,” he added.

Turf Club rules currently allow stewards the option of suspending a horse for unruly behaviour but there are no specific guidelines in relation to a quandary like the one Labaik currently presents.

He finished last of the seven runners on Tuesday but there was prizemoney in that race down to sixth and it required only one other horse to fall or pull up in order for Labaik to have earned prizemoney.

The horse who races in the colours of bloodstock agent, Aidan O’Ryan, is one of a dozen declarations for Friday’s €250,000 feature at Punchestown and is a 10-1 shot in some ante-post betting lists.

When Labaik condescended to race with his opposition at Cheltenham last month he recorded a memorable 25-1 victory in the Supreme Novices Hurdle.