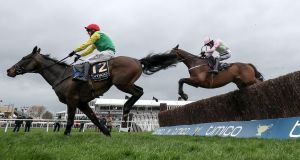 Sizing John’s transformation from Douvan’s punch-bag to champion is one of the stories of the season and he can confirm his new status by completing a unique Gold Cup ‘Triple Crown’ at Punchestown on Wednesday.

The race has been run under its present guise since 1999 when Imperial Call harked back to his glory days when he’d won the then Hennessy-titled contest at Leopardstown and the Gold Cup at Cheltenham in 1996.

Since then, Sir Des Champs (2013) and Carlingford Lough in 2016 have won both Irish races in the same season and both Kicking King and War Of Attrition successfully added the Punchestown race to memorable Cheltenham successes in 2005 and 2006 respectively.

However, Sizing John can carve out a singular niche for himself when taking on a handful of opponents in the day two festival feature.

They include England’s 2015 Cheltenham Gold Cup hero Coneygree and Djakadam, who has twice won the John Durkan around this course. But there appears to be a momentum behind Sizing John.

He would be a hugely popular winner for the Harrington-Robbie Power team and on the face of it there are likely to be much less apparent value short-odds favourites running this week.

But he is also the first reigning Cheltenham Gold Cup winner to come here since War Of Attrition when the Punchestown option had begun to look like a natural season-ending fit for any ‘Blue Riband’ winner.

So there’s a lot riding on Sizing John’s central festival status and that’s a statement that wouldn’t have occurred to many even last Christmas.

On his first start for Harrington after being moved by the owners from Henry De Bromhead, Sizing John filled a role he’d got used to, getting beaten up by Douvan at Leopardstown. It was the seventh time he was placed behind him.

If there didn’t seem much to lose by backing Power’s hunch that Sizing John needed further, then rarely if ever has a rider’s judgment been so spectacularly vindicated.

Over three miles at Leopardstown Sizing John always looked in control. It was the same at Cheltenham and if thoughts inevitably drifted on the back of those wins to what sort of horse Douvan might be, there’s no disputing his old rival’s right to centre stage now.

What will occupy minds now is whether three Gold Cups in three months might be too big a stretch but Harrington is optimistic on that score.

“It will only be his fifth race of the year and he didn’t start campaigning until Christmas, so hopefully he’s still got a bit left in the tank,” said the in-form local trainer.

Harrington’s top-flight ambitions on Wednesday will also include Someday in the Racing Post Champion Bumper. He is one of just half a dozen opponents to the Cheltenham winner Fayonagh and is among a total of just 21 runners overall in the day’s three Grade One races.

Fayonagh will attempt to join Cousin Vinny (2008) and Champagne Fever (2012) in completing the Cheltenham-Punchestown double and become the first mare to win this race in a dozen years.

She put up a remarkable performance to come from last to first at Cheltenham and wound up with Willie Mullins’s Carter McKay 20 lengths behind her.

He had been up with the pace throughout, which – the runner up Debuchet aside – might not have been the place to be. Prior to that, Carter McKay had dominated in smaller fields and he could be a major player here, giving Mullins a sixth win in seven years in this race.

Not many graduate from handicaps straight to Grade Ones but not many handicaps are won as impressively as Presenting Percy managed to land the Pertemps at Cheltenham.

He faces the Albert Bartlett winner Penhill in the Mirror Novice Hurdle but official ratings have Pat Kelly’s runner on top and the handicapper can be proved right again.

4:55 – Presenting Percy/Al Boum Photo: The Albert Bartlett form may not be all it seems, Death Duty running no race and The Worlds End falling two out, so Pertemps winner Presenting Percy could be the Cheltenham horse to back. Noel O’Brien’s decision to raise him to a new mark of 159 seems merited after his last win under similar conditions to today but it is worth saving on Al Boum Photo. He was value for more than the bare four lengths he won by last time, only getting racing room at the last hurdle, and should relish this trip.

5:30 – Sizing John: Much of the post-Aintree and Fairyhouse talk has been about what a race the 2017 Cheltenham Gold Cup will be with Yorkhill, Might Bite and Our Duke all possible participants, but it would be a mistake forget this year’s winner Sizing John who remains with significant potential at staying trips. He should complete a unique Gold Cup treble in a race likely to be run to suit with Outlander his biggest danger; each year he seems to disappoint at Cheltenham before returning to form at home.

6:40 – Mr Diablo/Rightdownthemiddle: Despite the prize money, this is not particularly competitive and Mr Diablo, well-proven at the track, is overpriced. He travelled nicely in the Topham despite not really taking to the National fences and shaped much better than the distance beaten. His second in a novice handicap over course-and-distance at last year’s meeting is strong form and 139 could underestimate him. Another Aintree runner, Rightdownthemiddle, caught the eye when failing to get home over an extended three miles on the Grand National undercard and now gets a more suitable distance.