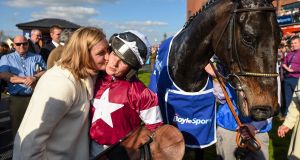 Sandra Hughes has announced she is to give up training in the next few months as she feels it is no longer financially viable.

Hughes took over the reins at Osborne Lodge in County Kildare on the death of her father, Dessie, in November 2014 and soon chalked up two Grade One wins with Lieutenant Colonel before the end of that year in the Hatton’s Grace and Christmas Hurdles.

She enjoyed her most valuable success with the Katie Walsh-ridden Thunder And Roses in the Irish Grand National at Fairyhouse in April 2015.

Hughes told RTE Racing. “I plan to wind down over the next two to three months, to be honest it’s no longer financially feasible to carry on, but we’re not sad about it, it’s the right decision for us. We gave it our all.

“A big thank you to all my staff — without them I wouldn’t have been able to do it, they were absolutely fantastic — and ‘thank you’ to all my owners who supported me and stayed with me until the end. It was fabulous.”

Reflecting on her training career, Hughes said: “The Irish National was a dream come true. I was going hoping he’d run really well after his bad run at Cheltenham, but to win was just absolutely magic. When he jumped the last, I closed my eyes, and I thought he was going to be placed but Katie was absolutely magic on him.

“All I said to her going out was ‘don’t bully him, he’ll do it for you’ and she just sat like a little mouse on him and she was wonderful. It was lovely for us, as a training establishment, to continue on what Dad had started. He brought these horses along as young horses and to finish off the job made us feel very proud.”