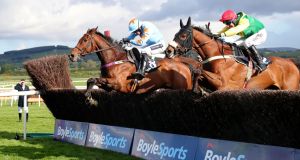 Jockey Robbie Power on board Fox Norton wins the BoyleSports Champion Chase during day one of the Punchestown Festival in Naas. Photograph: PA

Fox Norton followed up his Aintree success by taking the scalp of Un De Sceaux in the BoyleSports Champion Chase at Punchestown.

The Colin Tizzard-trained seven-year-old ranged up alongside Willie Mullins’ Un De Sceaux at the final fence and pulled clear on the run-in to give jockey Robbie Power a seventh Grade One win of the campaign.

Fox Norton (5-2) has been a model of consistency since joining the Tizzard team and after finishing a close second to Special Tiara in the Queen Mother Champion Chase he lifted the Melling Chase at Aintree.

He was not inconvenienced by the return to two miles, with the strong pace set by Un De Sceaux and Rock The World playing to his strengths.

Fox Norton got home by a length and three-quarters from the 10-11 favourite. Last season’s winner God’s Own was not disgraced in third place, just half a length away, and might have finished closer but for a mistake at the last.

Power, who won the Cheltenham Gold Cup on Sizing John in the same colours of Alan and Ann Potts, said: “It’s been an unbelievable season and getting a Grade One at Punchestown as well for Mr and Mrs Potts — it’s fantastic.

“He was flat to the boards the whole way. I didn’t want to give Un De Sceaux too much rope. Just because of that I was flat out the whole way and he made one or two little mistakes, but once we turned in I knew I would pick him up.

“Two miles is sharp enough for him. He’s a very relaxed horse. He’ll have no bother going further.”

Tizzard said: “It had been on our minds ever since Cheltenham and Aintree ‘are we going one step too far?’.”

“He’s just progressed into a beautiful young horse. Obviously this is his minimum trip, but he was good enough to win this and very nearly win a Champion Chase.

“This just looked lovely (for him). He did have three months off in the middle of the season when he cut into himself at Cheltenham, so it’s not like he’s been on the go all the time.

“He’s the one horse we thought we could bring here and he’s shown it all.

“You’ve got to stay in every race and he’s got that about him. Luckily enough when he came on the market Alan and Ann Potts wanted the horse. It doesn’t always turn out like that, but he has.

“Robbie was cool. He didn’t get involved in any battles until he had to. The horse made a few mistakes and Robbie said he was going flat out the whole time.

“If you saw this horse on the gallops you’d never think he was a champion two-miler. Honestly, slow three milers would beat him.

“This is why we get up in the morning and why we go looking at horses, to come and win at places like Punchestown. It’s fantastic.”

Asked if Fox Norton could step up in trip next season Tizzard said: “I think there’s every temptation. That was his minimum and if there had been a two-and-a-half-miler here today he would have been in that.

“He’d get three miles, but of course Sizing John is there. I think he’d get two and a half or three.

Mullins said of Un De Sceaux: “He probably wants it softer for that trip, and wants an extra half-mile on better ground. We’ve had a fantastic season with him and will put him away now.

“The faster pace over two miles on better ground didn’t suit him. The horse was in good order. He’s probably a two-mile horse on winter ground but when it comes to the spring he wants the extra half-mile.”

Un De Sceaux’s rider Ruby Walsh said: “Un De Sceaux just can’t burn them off on quick ground. They’re able to get to you, that’s all it is.

“He never stopped, he jumped super, but he just couldn’t burn them off on quick ground. It’s beautiful ground out there, but he wants it soft.”