Sizing John set to return at Punchestown after 733-day absence 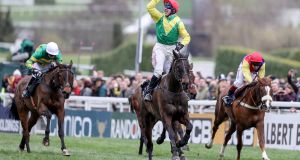 Punchestown racegoers are in for a treat when 2017 Gold Cup winner Sizing John takes on this year’s Cesarewitch and Irish National heroes over hurdles.

Jessica Harrington has had Tuesday’s Bet With Tote At Punchestown Hurdle picked out for some time for Sizing John, who has not run for 733 days.

At the time of his injury two years ago, he was the pre-eminent three-mile chaser in training, having won four consecutive Grade Ones, but how much ability he has retained during his time on the sidelines will be up for debate.

He will also be ridden on his return by Barry Geraghty, for the first time since leaving Henry de Bromhead’s yard back in 2016, because regular jockey Robbie Power is currently on the sidelines after a fall over Christmas.

Among those taking him on are Willie Mullins’ Stratum, better known for his exploits on the Flat including his Cesarewitch win, and stablemate Burrows Saint - who won the Irish National last spring.

“We’re looking forward to getting him back in action,” said Harrington.

“Probably two and a half miles over hurdles is a bit sharp for him these days at his age, but it’s a nice race to start him in.

“He’s ready to go, and we’ll take it from here.

“I haven’t been tempted to run him in another race. I’ve been waiting for this race, because once I spotted it I felt it looked just the right sort of race to bring him back in after all his time off.

“We saw it in the middle of November and felt everything else over Christmas would have been too hard for him first time back.”

Harrington is mindful nonetheless of the talented opposition among a seven-strong field for the conditions event.

“This is not an easy race by any means,” she added.

“There are others on the comeback trail, but we’ve done as much as we can and we’re happy with him. I think he’ll be glad to get back on the racecourse.

“With an Irish National winner and a Cesarewitch winner as well, it’s very interesting. We just want him to come back safe and sound, obviously.

“What will help is the ground — it won’t be a heavy slog.”