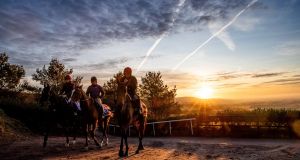 The JP McManus team are keeping their fingers crossed for soft ground conditions at Leopardstown next week to see if they might have a Gold Cup dark horse in Darasso.

The French recruit won on his only start over fences for McManus in the Grade Two Webster Cup over two miles at Navan last March.

That smooth defeat of the subsequent Topham Trophy winner Cadmium had some pundits nominating Darasso as a potential contender for top two-mile honours this season.

However the six year old’s sole entry this Christmas is the €175,000 Savills Chase at Leopardstown over three miles where some of Ireland’s top Gold Cup contenders are also due to line up.

“The plan is to run as long as it’s soft. That’s very, very important to him. If there’s any good in it he won’t be running. We see him as a stayer. He has no business taking on two-milers. So we’re going to dip in the water and how we get on,” McManus’s racing manager Frank Berry said on Tuesday.

Darasso has had just four starts for McManus and trainer Joseph O’Brien since arriving from France where he won a couple of steeplechases at Compiegne last year.

He was an impressive winner of the Grade Three Red Mills Hurdle at Gowran on the third of three runs over flights before that Webster Cup victory. It puts him on an official mark of 155 which is 22lbs behind the top-rated Savills entry Kemboy who won the race last year.

However in 2011 McManus’s Synchronised was a surprise winner of the same Leopardstown race before memorably proceeding to Gold Cup glory at Cheltenham less than three months later.

Darasso is already 33-1 in some lists for steeplechasing’s “blue riband” in March.

McManus’s Grade One priorities before that will be on St Stephen’s Day and the thorny question of where to run his impressive Drinmore Chase winner, Fakir D’oudairies.

The four-year-old French recruit is two from two over fences and gave an exhibition of jumping at Fairyhouse earlier this month where his nearest rival Samcro crashed out at the second last.

That was over two and a half miles while Leopardstown’s Racing Novice Chase is at the minimum two-mile trip over which he won on his fencing debut at Navan.

The St Stephen’s Day alternative is a potential return clash with Samcro in Limerick’s Matchbook Exchange Novice Chase over two and a half.

“It’s all up in the air, ground-wise, and we’ll have to see what’s in both races. No decision has been taken and it won’t be made until nearer the time.

“They’ll probably both be hot races but I don’t think Joseph [O’Brien] minds coming back (in trip) with him either. We’ll leave it late,” Berry said.

Another Grade One contender over Christmas will be the former top bumper performer Blue Sari who’s likely to line up in the Paddy Power Future Champions Novice Hurdle.

Blue Sari was runner-up to Envoi Allen in the Cheltenham bumper and was successful in his first start over hurdles at Punchestown last month.

Plans for another McManus novice, Andy Dufresne, are on hold however after his shock defeat in Sunday’s Navan Novice Hurdle behind Latest Exhibition. The Grade One novice at Naas in early January might be out of the reckoning for the expensive purchase.

“That could come a bit quick. He seems fine after the race. He was disappointing. We hope he’s better than that but he might not be. The winner looks a good horse,” Berry added.

In other news, Jessica Harrington’s Grand National runner-up Magic Of Light will be odds-on to win Wednesday’s Listed mares chase at Newbury for a second year running.

Magic Of Light has just three opponents and has almost a stone and a half in hand on official ratings.

Harrington also has three runners at Dundalk on Wednesday where Pallasator’s half-sister Ela Katrina has a first start for Ger Lyons in a maiden.

Purchased for £30,000 out of Roger Varian’s yard earlier this month it’s little surprise, considering the pedigree, that her best start to date was last time over a mile and a half.