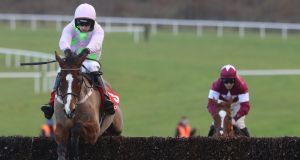 The remarkable Faugheen defied the years in style with a first Grade One success over fences at Limerick on a crammed St Stephen’s Day racing programme.

The 2015 Champion Hurdle hero is just a week shy of his 12th birthday but a new chapter to his storied career appears to have opened up.

On just his second start over fences he resoundingly got the better of his eagerly anticipated clash with Samcro in the Matchbook Exchange Novice Chase.

Ridden by Patrick Mullins for the first time since his bumper debut in 2013 Faugheen proved 10 lengths too good for his junior odds-on rival.

On a day when Notebook was a spectacular winner of Leopardstown’s Grade One feature under Rachael Blackmore, and Clan des Obeaux landed back-to-back King George VI Chase wins at Kempton, Faugheen proved a runaway winner in the feelgood stakes.

At his best he bore comparison to any hurdler in modern times but since a serious injury in 2016 he has juggled successes with performances that at time have looked to herald retirement.

If Willie Mullins’s decision to send him over fences this season looked a last throw of the dice then Thursday’s pay-off was spectacular.

From the second last fence any idea of a head-to head finish looked hopeful as Samcro started to struggle.

“By the time we got to the home straight I knew I had Samcro off the bridle and I knew my fellow would keep finding.

“When I needed big jumps at the last two I go them. He loves chasing. It turns him on – you can feel it,” reported Patrick Mullins.

Bookmakers cut Faugheen to 7-1 for the Marsh Novice Chase – formerly the JLT – at Cheltenham in March, a festival the popular veteran has been successful at twice before.

Willie Mullins was on duty at Kempton where his horse Footpad struggled home third in the King George behind Clan des Obeaux.

The winner was 21 lengths too good for his stable companion, and 5-4 favourite, Cyrname. It was an 11th King George for trainer Paul Nicholls.

Owner JP McManus drew a blank with all his runners in Ireland but at Kempton unearthed a new Champion Hurdle favourite in Epatante.

The mare was an impressive Christmas Hurdle winner under Barry Geraghty and is a general 7-2 shot to succeed McManus’s ill-fated champion, Espoir d’Allen, in March.

McManus was at Leopardstown but had to settle for minor honours in the featured Racing Post Novice Chase with Fakir d’Oudairies.

An expected head-to-head between that horse and the Mullins-trained mare Laurina failed to unfold and instead it was Notebook, for Michael O’Leary’s Gigginstown Stud team, who emerged on top.

“The Irish Arkle is probably the obvious next one from here but we’ll see,” said Notebook’s trainer Henry De Bromhead.

Earlier he had supplied Blackmore with another big race success as Aspire Tower maintained his unbeaten record over jumps in the Knight Frank Juvenile Hurdle.

“He had the profile of one on the Flat that you’d like to go hurdling with,” said De Bromhead of his 15-8 winner. “I’d imagine good jumping ground would be alright for him as he’s run on faster on the flat.”

Drumconnor Lad’s 20-1 ‘SP’ suggested his handicap chase victory wasn’t the most widely popular at Leopardstown but it proved a significant one just the same for Adrian Keatley.

The trainer tasted Classic glory on the flat in 2016 when Jet Setting landed the Irish 1,000 Guineas but will begin the New Year by switching a small team of half a dozen horses to a new base at Malton in Yorkshire.

In the morning Keatley announced his plans on Twitter and that Drumconnor Lad would be his last runner as a Curragh-based trainer.

A few hours later he got the perfect farewell outcome.

“It’s been a struggle to make a living in the last year, year and a half, and when you’re working hard and making no money it’s a no-brainer,” Keatley said.