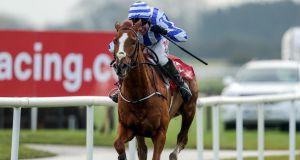 Robert Power on Cerberus on his way to winning at the Fairyhouse winter festival. Photograph: Laszlo Geczo/Inpho

Leading Triumph Hurdle hope Cerberus will race in the colours of JP McManus on his next start.

Joseph O’Brien’s charge was previously leased by the Good Counsellors Syndicate, which is made up of past pupils of Good Counsel College in New Ross. Co Wexford. Syndicate members include Irish Rugby international Tadhg Furlong and Kilkenny hurling star Walter Walsh.

Cerberus is as short as 12-1 for Cheltenham, and was last seen beating his stablemate A Wave Of The Sea – already owned by McManus – in the Grade Three Baroneracing.com Juvenile Hurdle at Fairyhouse at the start of the month.

Aidan O’Brien, deputy principal of Good Counsel College and head of the syndicate group, said: “We had him leased from Annemarie O’Brien. We always operated on the understanding that the horse was for sale and that if an offer came in for him he would be sold. We had an agreement to that effect.

“Obviously that didn’t look likely at certain stages. He was very disappointing on the flat at Gowran, and it was hard to know which direction he was going to go. We gelded him after that and sent him hurdling. Straight away you could tell that his hurdling form was going to surpass his flat form.

“After he won in Fairyhouse the first day we were getting a bit nervous that a move might be made for him, but thankfully that didn’t happen and he went on and won the Grade Three, which was fantastic.

“Joseph gave me a call a couple of days later and said JP was after coming in for him and he was going to buy him – business is business. We had great days with him and we are very grateful to Joseph and Annemarie O’Brien for putting us into the horse.”