Earlier, Apple’s Jade finished the year in style with a third straight win in the Frank Ward 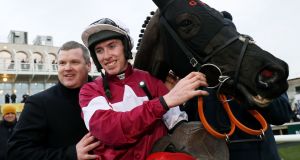 Ryanair boss Michael O’Leary’s decision to go racing for the first time in eight months got rewarded with a spectacular Grade One double at Leopardstown on Saturday.

Apple’s Jade put retirement on hold after rebooting her stellar career with an 11th top-flight success while Delta Work plunged himself back into the Gold Cup reckoning with a narrow victory in the €175,000 Savills Chase.

Delta Work’s win at 11-2 completed hat-tricks on the day for both jockey Jack Kennedy and trainer Gordon Elliott although inevitably O’Leary wound up the focus of attention.

It was the businessman’s first day racing since his shock announcement in May of plans to wind down his Gigginstown Stud racing operation over the next five years.

The reason given was a desire to spend more time at weekends with his family and the sight of O’Leary with his wife and four children on Saturday doesn’t indicate any change of heart.

Four Gigginstown winners spread between Leopardstown and Limerick on Saturday – to go with five winners on Friday – prodded O’Leary into joking: “After 20 years I’ve discovered the secret of ownership is to stay away!”

However, asked about the significance of his kids at the races, O’Leary quickly quashed any hopes of reconsidering his decision.

“My children love winning. They are very happy to come up here for a presentation and a trophy to be got. But you don’t see them in the unsaddling enclosure.

“The kids love this but they just don’t like doing Navan on a wet Sunday.

“The conversation on the way home in the car will be ‘will we have pizza’ or ‘can we go and see the new Star Wars movie before New Year’s Eve’. They couldn’t care less about the racing.

“I made the decision last year and don’t have any point-to-pointers this year. These horses will work their way through the next five or six years. They are with the best trainers in Gordon, Noel, Joseph and Henry,” he said.

Delta Work’s dramatic defeat of Monalee in the big race saw his odds cut to 10-1 to become a third Cheltenham Gold Cup winner for O’Leary in March.

As with Roaring Bull in the previous day’s Paddy Power Chase he looked an unlikely winner at the last only for Jack Kennedy to get into overdrive and power home to beat Monalee by a head.

Rachael Blackmore had dominated from the front on Monalee, looked to have stacked the opposition up early in the straight, and then tried to quicken away.

The 7-4 favourite Kemboy and Road To Respect couldn’t catch Monalee on who Blackmore lost her irons in the final strides.

However Delta Work, a leading novice last season, but disappointing on his return to action at Down Royal, managed to give his owner a sixth win in the race in the last seven years.

Kennedy reported: “He jumped and travelled very well. I was probably a little bit closer than I wanted and he was in my hands a bit. They went steady but it all worked out.

“I thought the safest thing was to stay wide and get him rolling. He winged the last and galloped all the way to the line.

“He probably started to tie up a little bit in the last 50 yards and Monalee came back at him but in fairness he stuck his head out.”

Elliott’s confidence that Delta Work would prove a more formidable proposition compared to Down Royal was vindicated in style and he was delighted for his jockey who also won on Dermot Weld’s Dalton Highway.

“It’s great for Jack as well because he’s had a lot of bad injuries and he’s a serious rider. To have him back riding winners is great,” said the trainer who also saddled The Bosses Oscar to win earlier on the card.

There was no disputing the day’s most popular winner, however.

After two lack-lustre runs earlier this season Apple’s Jade was given one last chance to show a glimpse of her peak racing ability or face the prospect of a new career at stud.

The 6-4 joint-favourite looked a different proposition this time, grabbing the initiative from the start and running out a 17-length winner from the veteran Unowhatimeanharry.

It completed a hat-trick of wins in the Frank Ward Memorial Hurdle and although Apple’s Jade was cut to 8-1 to regain her OLBG Hurdle crown at Cheltenham her future is on a race to race basis.

“I can’t imagine she’d go to Cheltenham. If she has one more bad run she is getting retired. But if she runs like that and jumps like that we’ll keep going.

“If she hadn’t run well today she was going to be retired. She jumped really well today, she was jumping out to her right but she was making ground at her hurdles and seemed really keen.

“She was very lifeless at Fairyhouse and in Navan, which isn’t like her. It looks like she’s back which is great. Today is a great bonus and it’s wonderful to see her back. I’d imagine she’ll come back here in February (Irish Champion Hurdle),” he added.

Even by his own exalted standards Apple’s Jade’s return to winning form represented a coup for Elliott who opted to run the mare in first-time cheek-pieces.

“I was delighted to see the horses coming up and taking her on the whole way. I asked Jack did it make a difference and he said no. He said just going to the start she felt different than she’s felt all year.

“Keith Donoghue has brought her out hunting, we put cheekpieces on her and took the cross noseband off. I don’t know what’s done it to be honest.

“I’d still say her work wasn’t as good as what it was but hopefully she’ll get as big a kick out of that as we did and she might be back. I was just delighted to see her winning, it’s unbelievable.

“As I said there was a fair chance she was going to be retired if she didn’t win today and she obviously listened to us talking.

“She doesn’t owe us anything and whatever she does now is a bonus. She’s been competing at the top end since she was three years of age and it’s hard to keep doing it. She’s the horse of a lifetime and for her to do that today was just special,” Elliott said.

A Leopardstown factor can’t be ruled out in Apple’s Jade’s return to form either as she is now unbeaten in five starts at the Dublin course.

Joseph O’Brien supplied Gigginstown’s final Leopardstown winner when Forged In Fire got the better of a prolonged duel with the odds-on favourite Ferny Hollow by half a length in the bumper.

It was a first success for jockey Neil Bashford.

Willie Mullins saddled a one-two in the Beginners Chase but it was the ‘wrong’ way around for favourite backers as Easy Game proved too strong for Allaho.

Both could clash again in the Flogas Novice Chase at the Dublin Racing Festival in February.

“I was expecting the other horse to win but Easy Game just has that little bit more speed. Paul (Townend) felt the other horse (Allaho) just needed the race. He thought maybe the next day under the same conditions he could turn the tables,” Mullins said.

“He (Easy Game) is probably not a real winter ground horse and when he won that it tells me the ground is a lot better than a lot of people imagine,” he added.

1 Reality Bites – Tales from the new normal: Caitríona Cormican
2 James McClean still failing to learn his own online history lesson
3 A beautiful, happy accident - Moneyball is the best sports movie ever
4 Ian McKinley: ‘You do take for granted the simple things in life’
5 Nicholas Quinn: ‘Swimming became how I dealt with grief’
Real news has value SUBSCRIBE