Ian O’Riordan: For the world’s top marathon runners, it will feel a long way from Tokyo 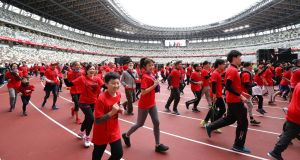 Runners participate in an opening event for the new National Stadium in Tokyo, Japan, on Saturday December 21st, 2019. The stadium will be the main venue for the 2020 Olympics and Paralympics next July. Photograph: Jiji Press/EPA

How does it feel to be the “most ready” host city in Olympic history? The International Olympic Committee (IOC) does not throw around these compliments for the laugh, and by all accounts there is nothing to worry or to fear about the readiness of Tokyo and the Games of the 32nd Olympiad, beginning next July 24th. That’s a Friday, by the way.

It didn’t make much history or set any record, but on the Saturday before Christmas, the new National Stadium in Tokyo was formally reopened, all 68,000 seats – that’s the new capacity – filled again for the first time since . . .

It was basically a novelty event, billed as “Hello Our Stadium”, where a select number of the Tokyo public – 2,020, to be exact – got to run a lap of the new track by virtue of a national lottery. Usain Bolt got to run a lap too. It was a big deal, nonetheless.

This is the exact same site and scale of the old National Stadium, built specifically for when the Olympics were first hosted by Tokyo way back in 1964. My dad ran 12½ laps of that track.

Those Olympics actually began on October 10th, a Saturday, and that date, or the first Monday that falls after, is now a national holiday in Japan and considered sacred, given the turning point it marked in Japanese history: the first Olympics in Asia, and the country’s unequivocal re-emergence from wartime enemy of the West to peaceful global ally of today.

Tokyo 1964 marked many a turning point in Olympic history, firsts and lasts: the first to be telecast internationally by satellite, in colour too, and the first to boast such technological advances as the photo finish on the track and electronic starting gun in the swimming pool. Nine days before the Games started, Tokyo Station also ran the first Japanese bullet train from Osaka. The year also marked the last of the cinder Olympic running tracks and the first Paralympics.

The new National Stadium will be open again for the first proper sporting event on New Year’s Day – this Wednesday, by the way – for the staging of the Emperor’s Cup, also known as the Japan FA Cup Final, the longest-running football tournament in Japan, dating back to 1921. Vissel Kobe will play against Kashima Antlers, and the winners will qualify for Asia’s Champions League.

There are a couple more test events planned – the Japan Para-Athletics Championships on May 2nd/3rd, and the Tokyo Challenge Track Meet on May 5th/6th – and then that’s pretty much it until the Opening Ceremony next July 24th. No drilling down the seats at the last minute. No wet tiles in the toilets.

The track and field events – the headline acts of every Olympic Games – will take place inside the new National Stadium from Friday July 31st to Sunday August 9th, the same day, or evening rather, as the Closing Ceremony. Every session is a sell-out, although that Sunday ticket was, and still is, the hottest in Japan, in part because it was originally to double as the finishing moment for the men’s marathon. That was to be a very historical 26.2 miles around Tokyo. Now read on.

Instead – and in truth only the IOC can justify this – the men’s marathon will now finish earlier that day, shortly after nine o’clock in the morning at Odori Park in the city of Sapporo, 831km – or 516 miles in old money – to the north of Tokyo, in Hokkaido, the northernmost and most mountainous of Japan’s main islands. It will feel a long way from Tokyo and I know that because I’ve been there.

All this was only agreed and decided in full last week, gently testing Tokyo’s “most ready” billing, when the IOC, in polite agreement with World Athletics, the governing body of the sport, approved a rectangular half marathon-length course for the first half of the race, followed by two laps of a roughly 10km segment of the first loop.

Check the temperature of August 9th, 2019 in Tokyo and Sapporo and they were simmering at exactly the same level

Still, something and everything about those marathons in Sapporo will feel a long way from Tokyo, in distance and in spirit. The women’s marathon has also been moved up there for the Saturday morning of August 9th, and the race walks – the 20km and 50km – will also happen around Odori Park on August 6th and 7th, the Thursday and the Friday.

The IOC has been adamant this is all about the athletes’ welfare, and saving them from the potentially crippling heat and humidity of high summer in Tokyo. Well, check the temperature of August 9th, 2019 in Tokyo and Sapporo and they were simmering at exactly the same level.

That’s almost beside the point: it’s hard to find anyone who actually agrees with this decision to stage the marathons and race walks in Sapporo, especially among the athletes themselves. In part this is because of the realisation Tokyo has been denied one of its potentially iconic Olympic moments, the finish of the men’s marathon inside the new National Stadium; to fully understand that, one only has to watch the lasting inspiration that is Kon Ichikawa’s 1964 documentary Tokyo Olympiad, now available in full on the Olympic YouTube channel, which contains some of the greatest sporting footage ever shot. Look it up.

The Tokyo organisers were intent on documenting their original Games, no doubt motivated by the standard, politically and aesthetically, set by Leni Riefenstahl with her celebration of the 1936 Berlin Olympics. Ichikawa avoided the political rituality of Riefenstahl, and instead indulged in the absolute purity of the sporting events, and nowhere is that more evident than in his footage of the men’s marathon.

If he’d somehow summoned the energy to go on, Hogan would have won an Olympic medal

On October 24th, 1964, a field of 68 runners from 35 countries set out from the old National Stadium on the out-and-back course to Tobitakyu-machi, in west Tokyo; at the turning point, Abebe Bikila of Ethiopia had dropped the entire field except for Ireland’s Jim Hogan.

Bikila had won the Olympic marathon four years previously, running barefoot in Rome, and in Tokyo proved an even more convincing winner, with a then world record of 2:12.11, the first and last man to defend an Olympic marathon title.

Ichikawa’s camera focuses more on the chasing runners. It shows Hogan coming to a halt at 23 miles, trying in vain to run on, before sitting down on the kerbside and gesturing with his hand for a drink. If he’d somehow summoned the energy to go on, Hogan would have won an Olympic medal.

Two years later, Hogan made some amends when winning the 1966 European Championship marathon in Budapest. Only this time he was wearing a British vest. There is a book in that story, and it’s called The Irishman Who Ran for England.