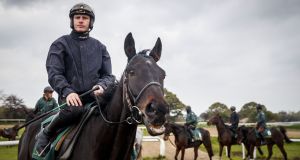 Paul Townend on Al Boum Photo. The Cheltenham Gold Cup winner may line up in the €175,000 Savills Chase at Leopardstown. Photograph: Oisin Keniry/Inpho

Willie Mullins has indicated his Cheltenham Gold Cup hero Al Boum Photo could return to action at Leopardstown over Christmas.

Ground conditions at the Dublin track suggest the horse that finally broke Mullins’s duck in steeplechasing’s “blue riband” may line up in the €175,000 Savills Chase.

That means a potentially mouthwatering Grade One clash with his stable companion Kemboy instead of waiting for another option at Tramore on New Year’s Day.

Al Boum Photo won at Tramore a year ago – his sole start before that momentous Gold Cup success in March – as last winter’s unseasonably dry weather meant Tramore provided a rare window of testing ground. That doesn’t look like being an issue this week.

“I’m coming around to the idea of Al Boum Photo going to Leopardstown. With all the bad weather, we’re going to have totally different ground to last year and that brings Leopardstown into the equation for Al Boum Photo.

“Kemboy runs in that race and so could Bellshill. I think the three of them could all run there. I’d be disappointed if they’re all not fairly forward.

“It looks like being normal nice winter ground for Leopardstown. The other tracks are fine but Leopardstown was so dry last year. We’re happy to run anything there at the moment,” Mullins said on Sunday.

The champion trainer saddled 10 winners overall during the four days of Christmas action in 2018, a tally that paled in comparison to a staggering haul of 22 winners during the holiday period in 2016.

I imagine Laurina will go to Leopardstown and Faugheen will go to Limerick. That’s the plan at the moment

Last year’s St Stephen’s Day action saw Mullins have a single victory each at Leopardstown and Limerick, and he missed out on both Grade One novice features on that day.

This Thursday could be different, though, as he tackles those contests with established top-flight stars.

The 2015 Champion Hurdle winner Faugheen is set to clash with Samcro in the Limerick contest, although a decision whether or not Fakir D’ouodairies will also line up is likely to be left as late as possible before Monday’s final declaration stage.

The Joseph O’Brien-trained Fakir D’oudairies, an impressive winner of the Drinmore Chase at Fairyhouse earlier this month, may instead take on Laurina in the Leopardstown race.

Mullins’s exciting Chacun Pour Soi is odds-on for Friday’s Paddy’s Rewards Club Chase, and other likely Grade One options for him over the Christmas period include Klassical Dream in the Matheson Hurdle on Day Four of Leopardstown.

Mullins is also in St Stephen’s Day action in Kempton where Footpad will line up for the King George VI Chase, a race the trainer won in 2001 with Florida Pearl.

On Friday Duc De Genievres could take on Altior in the Desert Orchid Chase at Kempton, a race that has also attracted Henry De Bromhead’s Ordinary World among eight initial entries for the Grade Two contest.

1 Gerry Thornley: Wild reactions to this Ireland team as fickle as the wind
2 Munster were fever-tested when they arrived in Italy
3 England and Eddie Jones at the vanguard of rugby’s hybrid era
4 Dan Tuohy explains ‘rotten to the core’ comments
5 Barcelona nab away goal after going behind in Naples
Real news has value SUBSCRIBE